A. Lange & Söhne and Wempe celebrate 25 years of partnership

A. Lange & Söhne
0
Wempe was one of the dealers invited to Dresden where the first Lange collection of the new era was presented on 24 October 1994. To celebrate the anniversary, A. Lange & Söhne has reintroduced the 1815 UP/DOWN with the characteristic power-reserve indicator. Limited to 25 watches each in white gold and pink gold, the timepiece is endowed with a deep blue signature dial.

A. Lange & Söhne and Gerhard D. Wempe KG share a legacy that dates back to the 1930s. At that time, Wempe carried A. Lange & Söhne pocket watches in Hamburg, and the companies cooperated in the field of marine chronometers. Otto Lange, the grandson of founder Ferdinand Adolph Lange, and Herbert Wempe, the second-generation manager of the jewellery business, also joined forces to establish and evolve the “Glashütte Observatory” working group.
For this reason, Wempe was naturally among those who attended the presentation of the first four wristwatches of the new era. Walter Lange and Günter Blümlein invited the most respected jewellers in Germany, Austria, and Switzerland to the residential palace in Dresden in October 1994. After a tour through the manufactory, when Hellmut Wempe held the new models in his hands, he knew right away: Everything’s perfect here. The watches, the people, the background story. A. Lange & Söhne cultivated Glashütte watchmaking traditions with a contemporary approach.

In the end, Hellmut Wempe ordered more watches than Lange was able to deliver at that time. It was a grand vote of confidence and the new beginning of a business relationship based on friendship; one that has lasted 25 years. Today, A. Lange & Söhne wristwatches are available at 25 Wempe points of sale – from Hamburg to New York and even on the high seas. Wempe also operates the A. Lange & Söhne Boutiques in Munich and London.

For A. Lange & Söhne, the anniversary is the perfect occasion to present a limited edition of the 1815 UP/DOWN with 25 watches each in white gold and pink gold. The first part of the name refers to the birth year of watch pioneer Ferdinand Adolph Lange. The second part is Lange’s designation of the iconic power-reserve indicator. An engraving on the caseback denotes the limited edition. 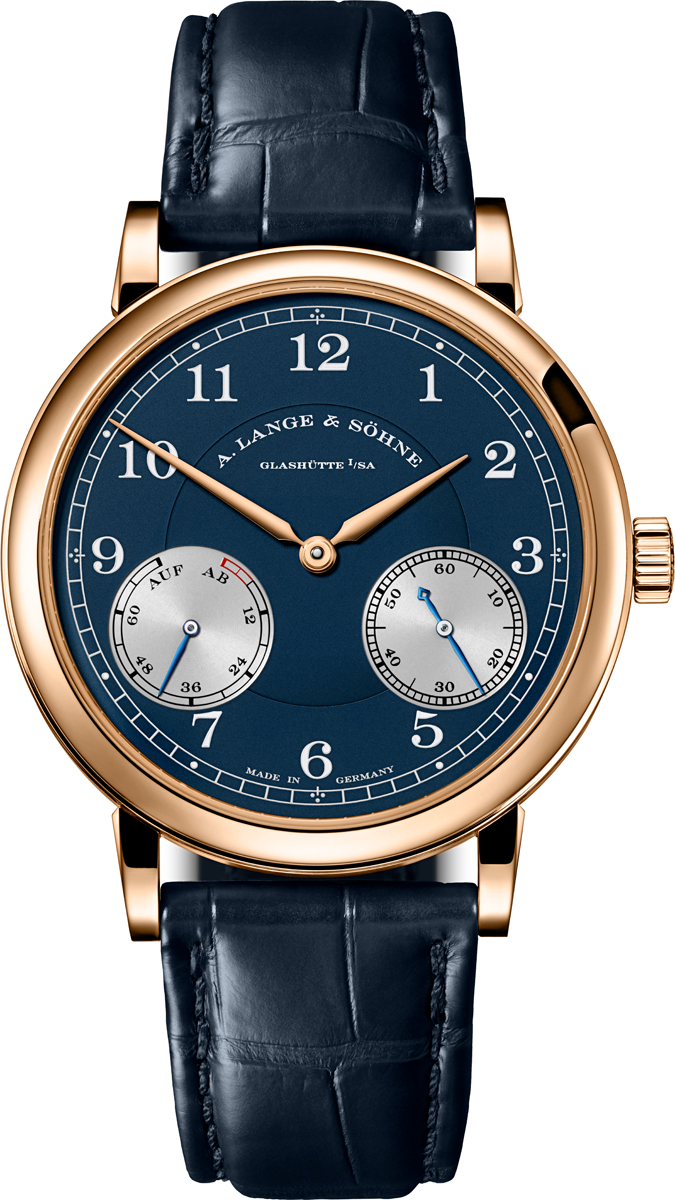 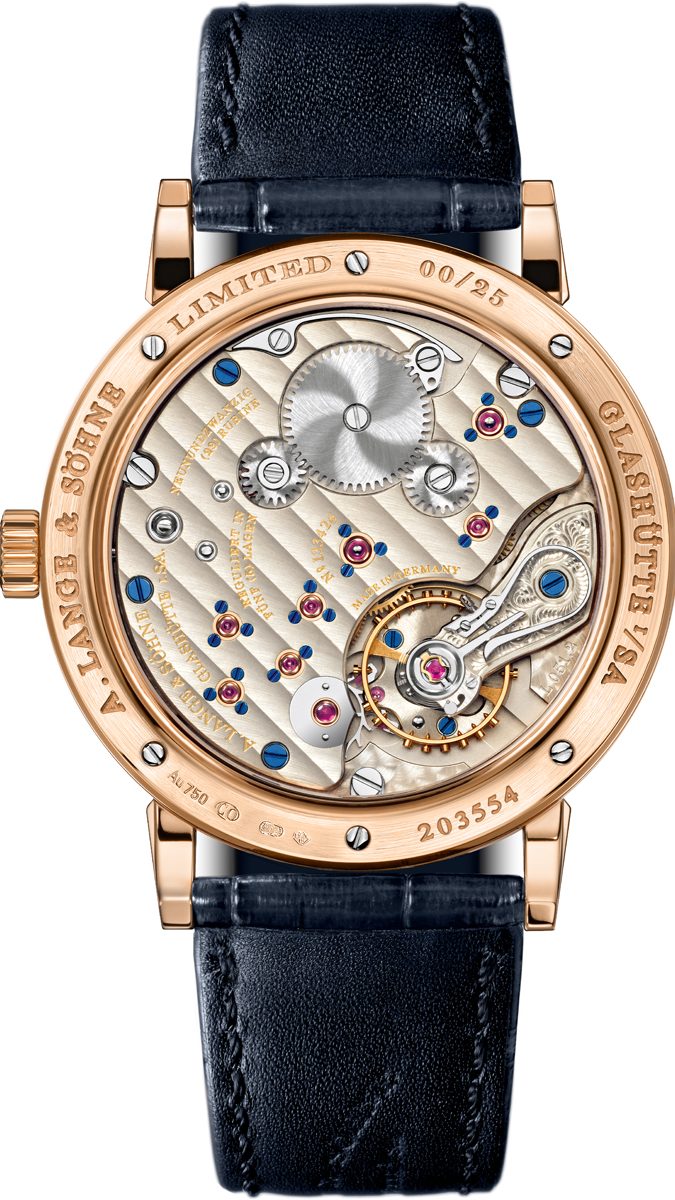 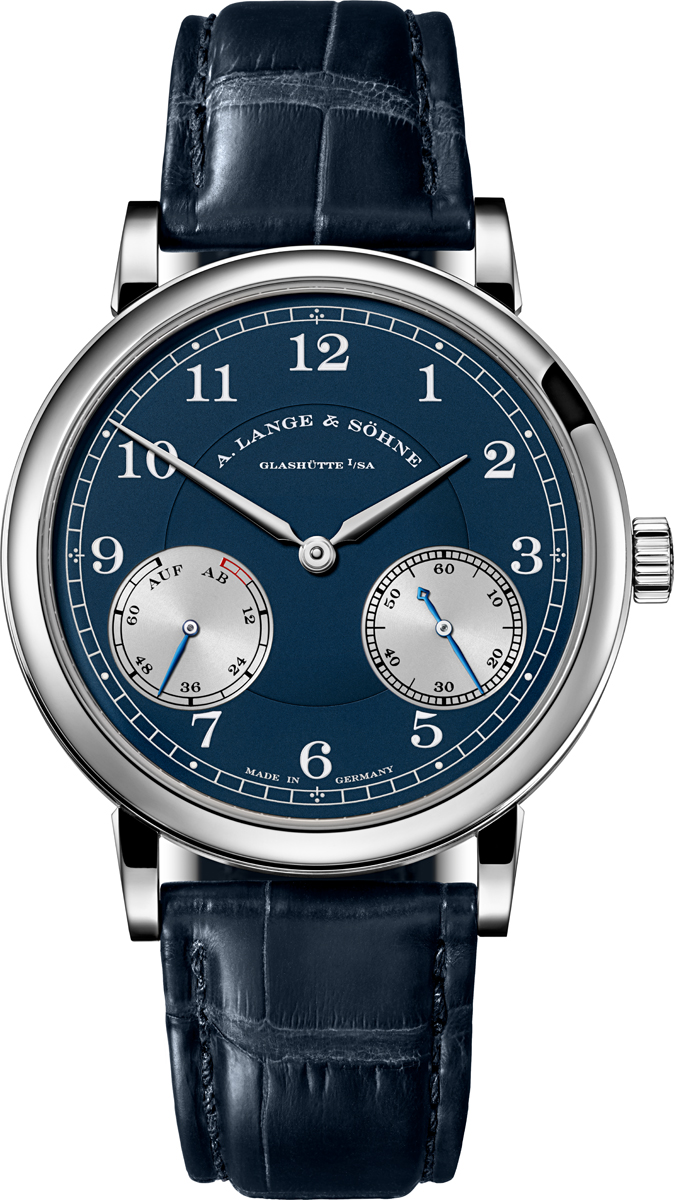 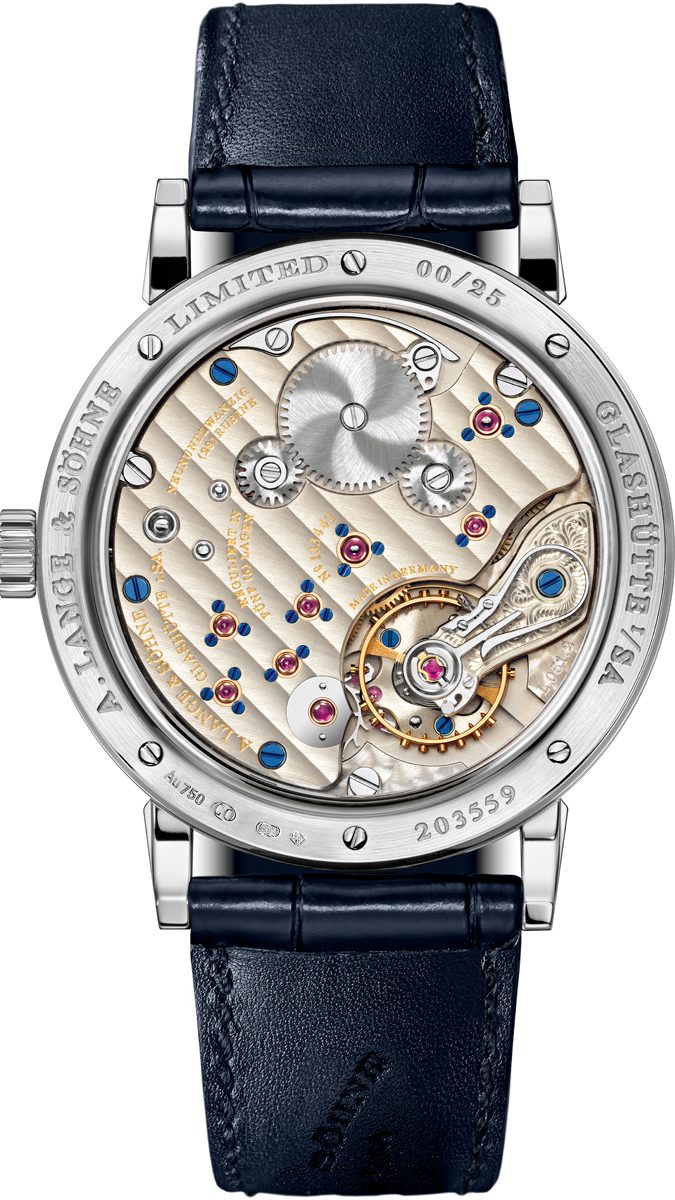 Both models are graced with a deep blue dial in solid silver. The rhodié-coloured subsidiary dials for the small seconds and the power-reserve indicator contrast well against the dark background. The hands for the hours and minutes, in white gold or pink gold to match the case, and the white Arabic numerals ensure good legibility. Just like the white-printed railway track minute scale, they recall the era of pocket watches. The colour concept is rounded out with a dark blue alligator leather strap that is secured with a white- or pink-gold prong buckle.

The manually wound calibre L051.2, developed and crafted in-house, has a power reserve of 72 hours. The movement’s hallmarks include a balance cock with a free-hand engraving, the three-quarter plate decorated with Glashütte ribbing, seven screwed gold chatons polished to a mirror gloss, and the solarised winding train which is visibly integrated in the calibre.