The Tonda GT and its more complicated sibling, the Tondagraph GT, derive their case shape and other design cues from 2016’s Tonda Chronor Anniversaire, which not only featured Parmigiani Fleurier’s first-ever in-house integrated chronograph caliber but also famously took home the award for best Chronograph Watch at the 2017 Grand Prix d’Horlogerie de Genève (GPHG). Guided by the same Golden Ratio principles applied to that milestone timepiece, Tonda GT models feature updated teardrop-shaped lugs for increased ergonomics, an integrated bracelet in the same materials and finishes as the case, and fluted bezels that trace their architectural ancestry to the brand’s very first watch design, the iconic Toric series. The dials host a decorative yet understated clou triangulaire guilloché motif, along with the open worked Delta-shaped hands that have become a hallmark of the Parmigiani Fleurier portfolio. 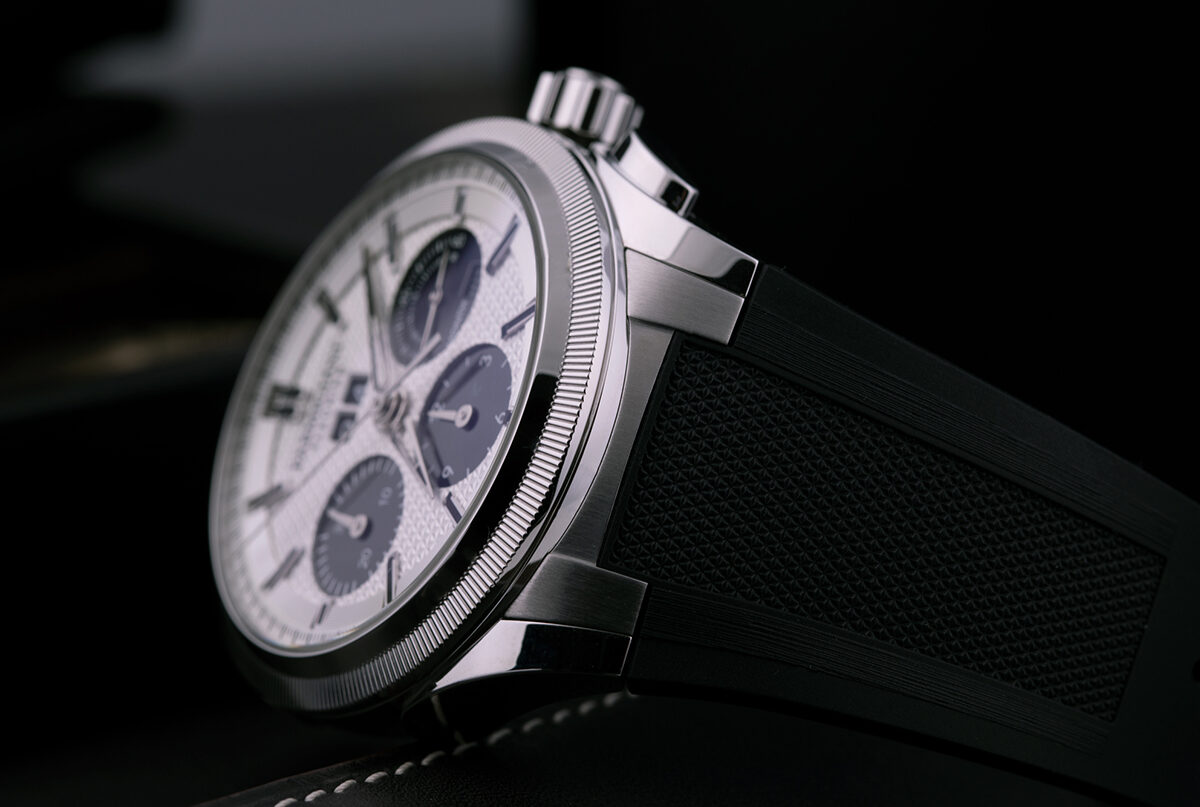 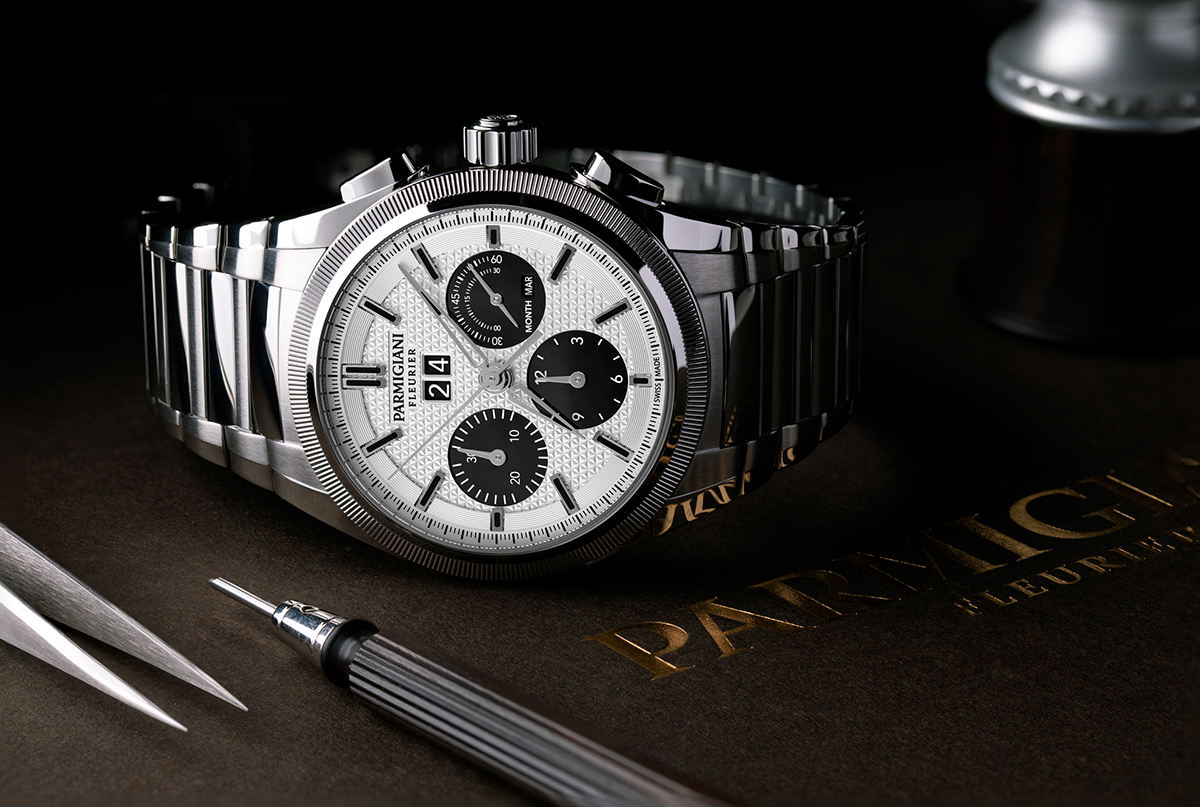 The two newest additions to the growing Tonda GT collection both hail from the Tondagraph GT sub-family, though each reference offers a subtly different series of useful functions, technical capabilities, and aesthetic charms. What unites them visually and ensures their appeal to today’s connoisseur of sophisticated sporty luxury, are their dials, in the classical and crowd-pleasing bicolor style of a silvered main dial and a trio of black subdials. The juxtaposition of these two colors brings the series a further purity of design and a fresh, stylish execution that evolves naturally from the first generation of Tonda GT models.

The Tondagraph GT Steel Silver Black
The Tondagraph GT Steel Silver Black features a 42-mm case, forged in polished and satin-brushed stainless steel and boasting a water resistance of 100 meters. Its silver-and-black dial adorned with clou triangulaire texture has rhodiumplated indexes treated with black luminescent coating. Like its predecessor with a black dial, the watch houses the automatic Caliber PF043. Though the watch’s name indicates that it is a chronograph, it is actually something much more special, as Caliber PF043 enables the rare horological pairing of a chronograph with an annual calendar. The familiar Delta-shaped hands with black luminescent coating display the time while the date appears prominently in a large double aperture at 12 o’clock. Subdials at 9 and 6 o’clock host the chronograph readouts and the 3 o’clock subdial serves the dual functions of a running seconds indicator and a display of the month. As in all annual calendars, this indicator requires adjustment only once per year, from February to March. 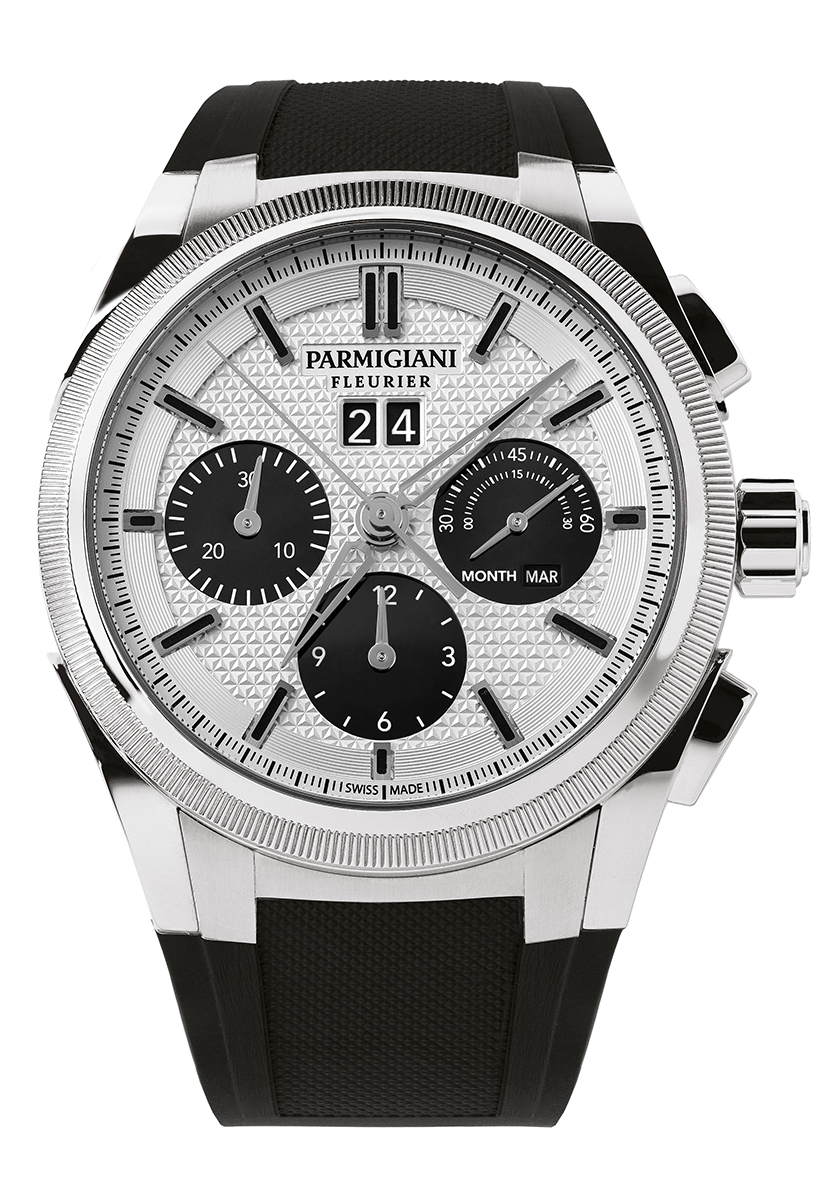 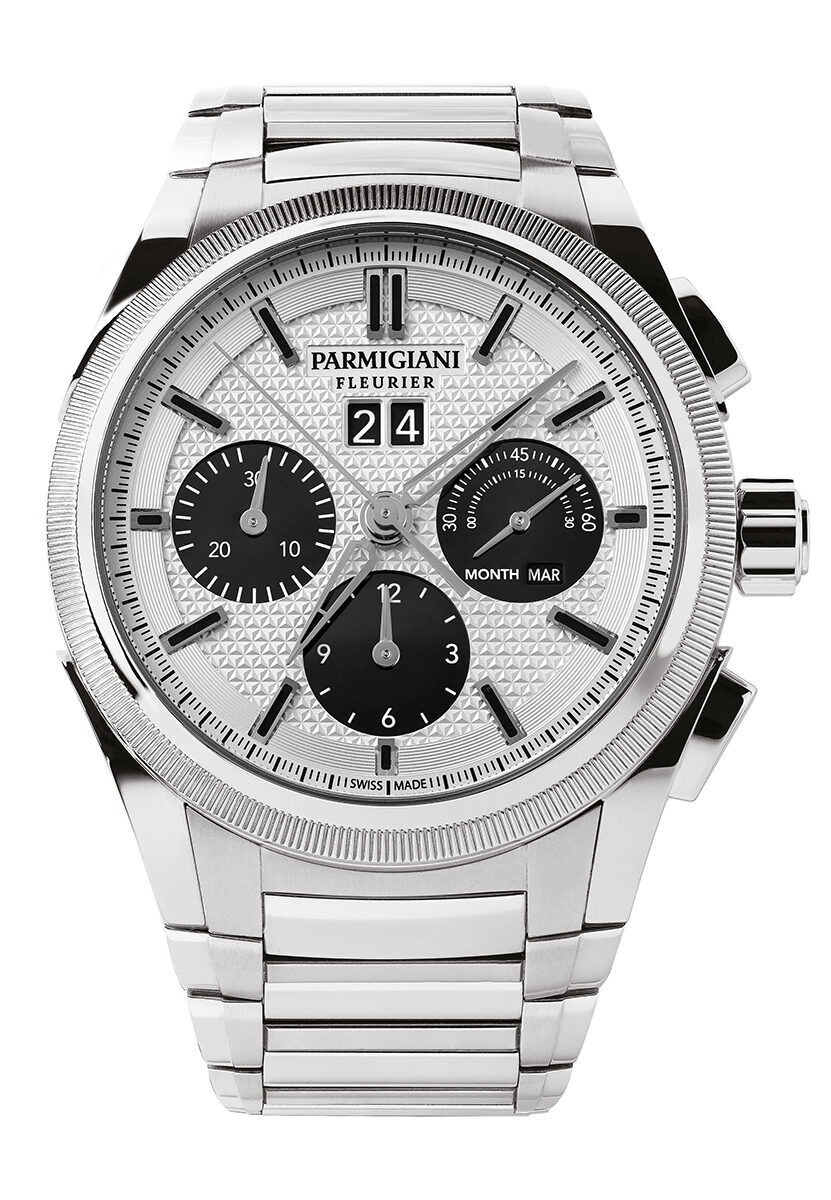 The automatic movement that drives all these functions is on display behind a sapphire case back that beautifully displays the 22k gold rotor, providing a power reserve of 45 hours and showcasing a host of decorative finishes, including the circular côtes de Genève pattern on the bridges.
Subtle but significant evolution in the service of legibility has long been a watchword at Parmigiani Fleurier and the Tondagraph GT Steel Silver Black edition features another example: the orange numerals and details that appeared on its black-dialed predecessor have been replaced with higher-contrast elements in white. “With this new model we wanted to exalt the contrast between the counters and the silver dial,” says Parmigiani Fleurier CEO Guido Terreni. “Taking out the orange indicators of the first edition helped us obtain a pure and long lasting aesthetic.” 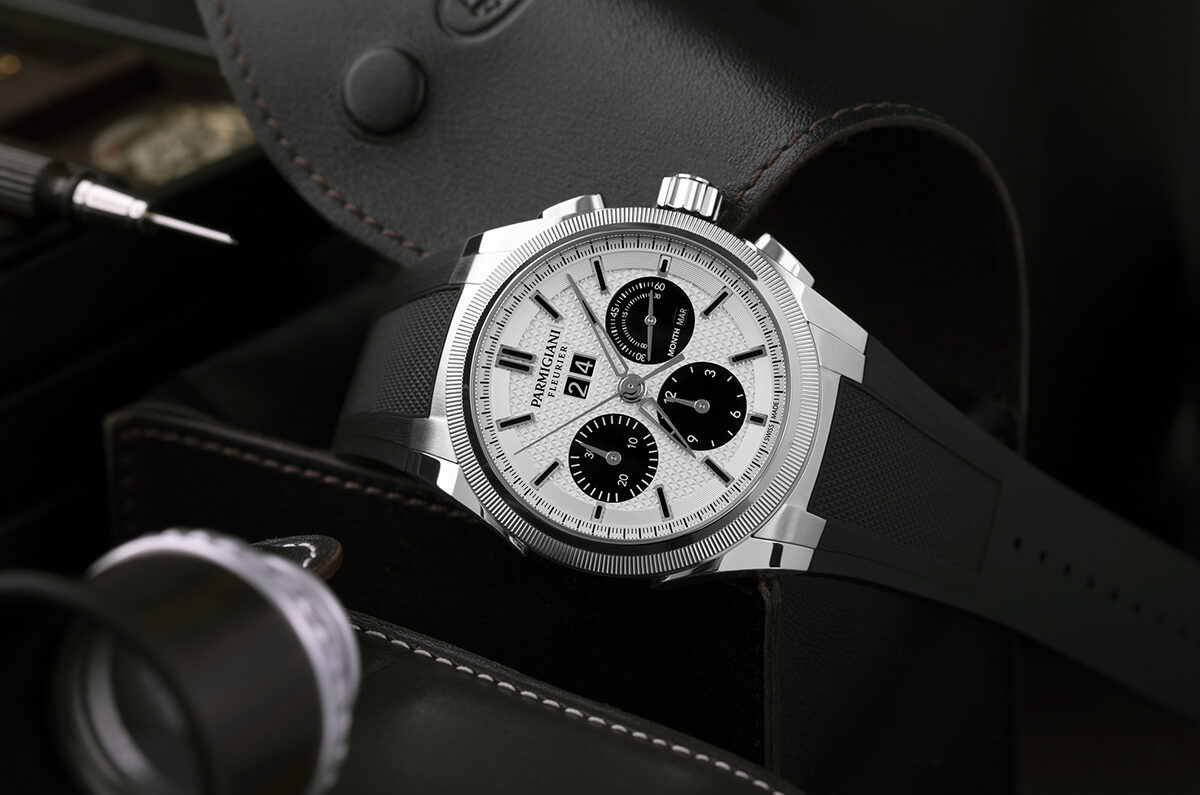 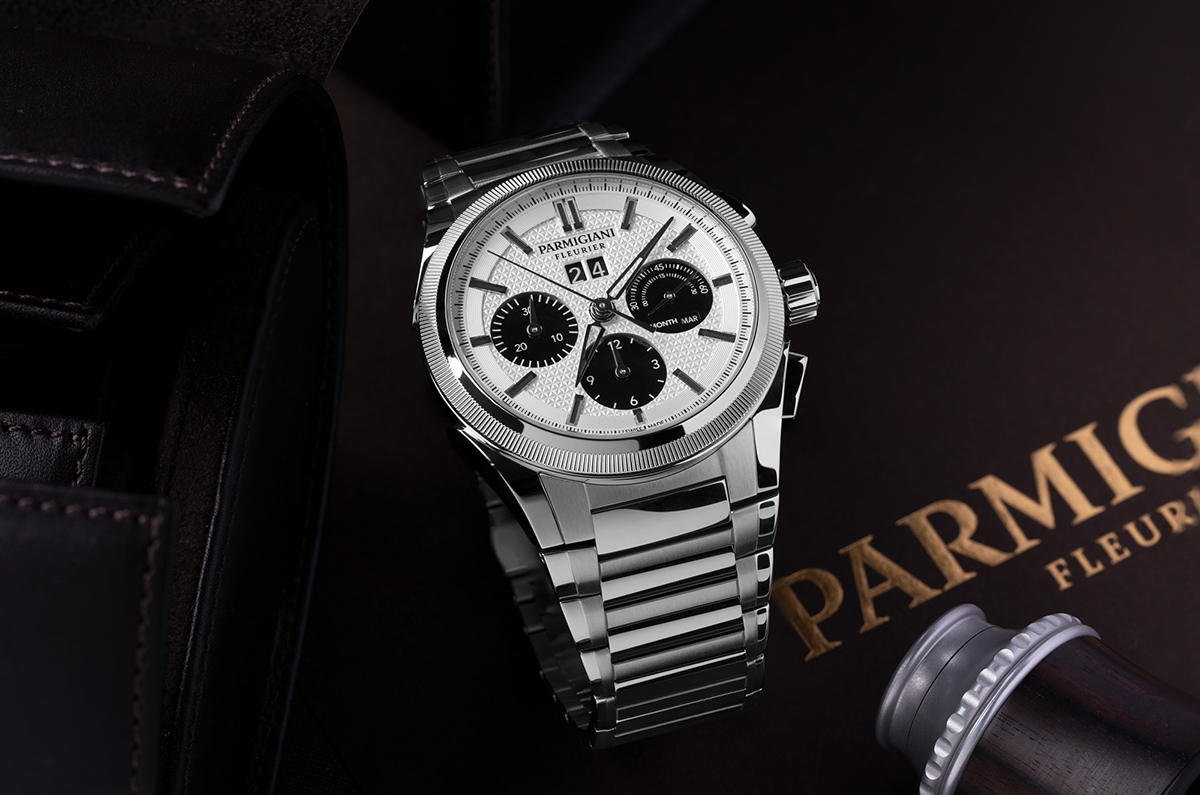 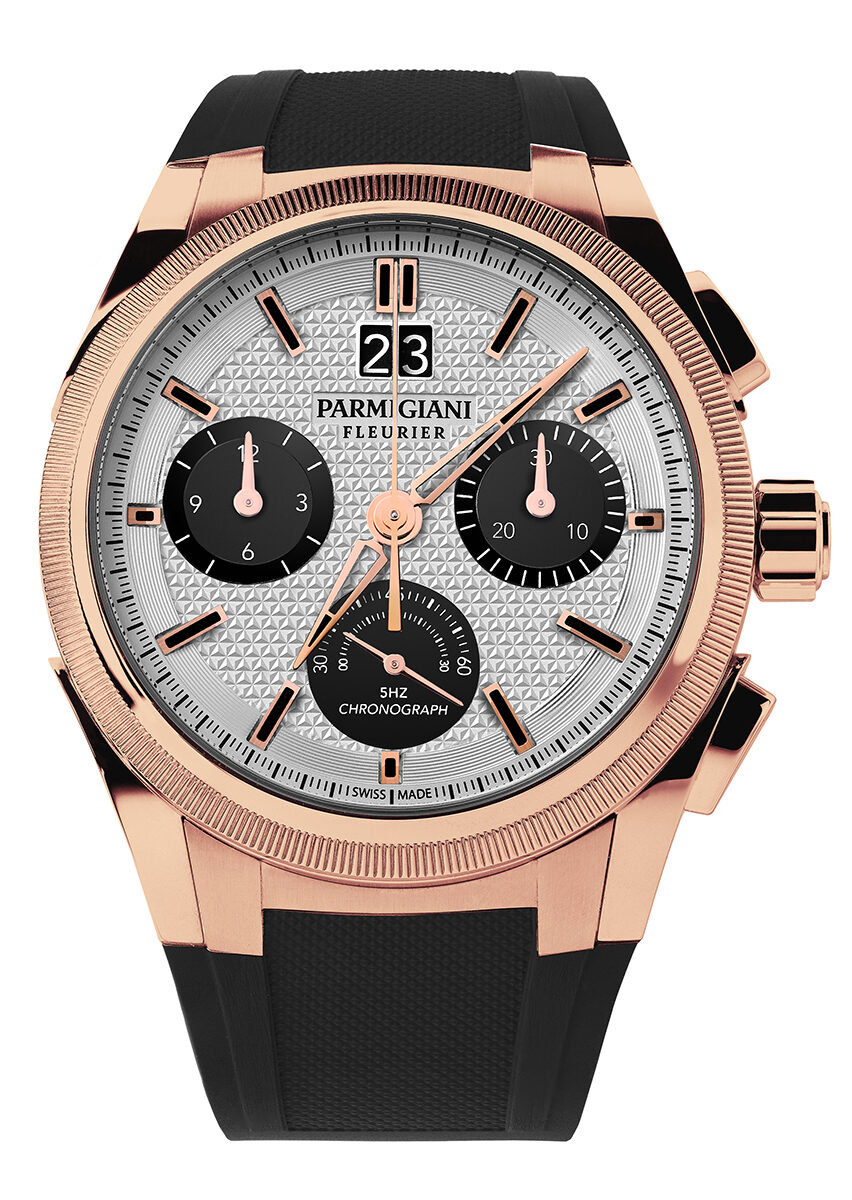 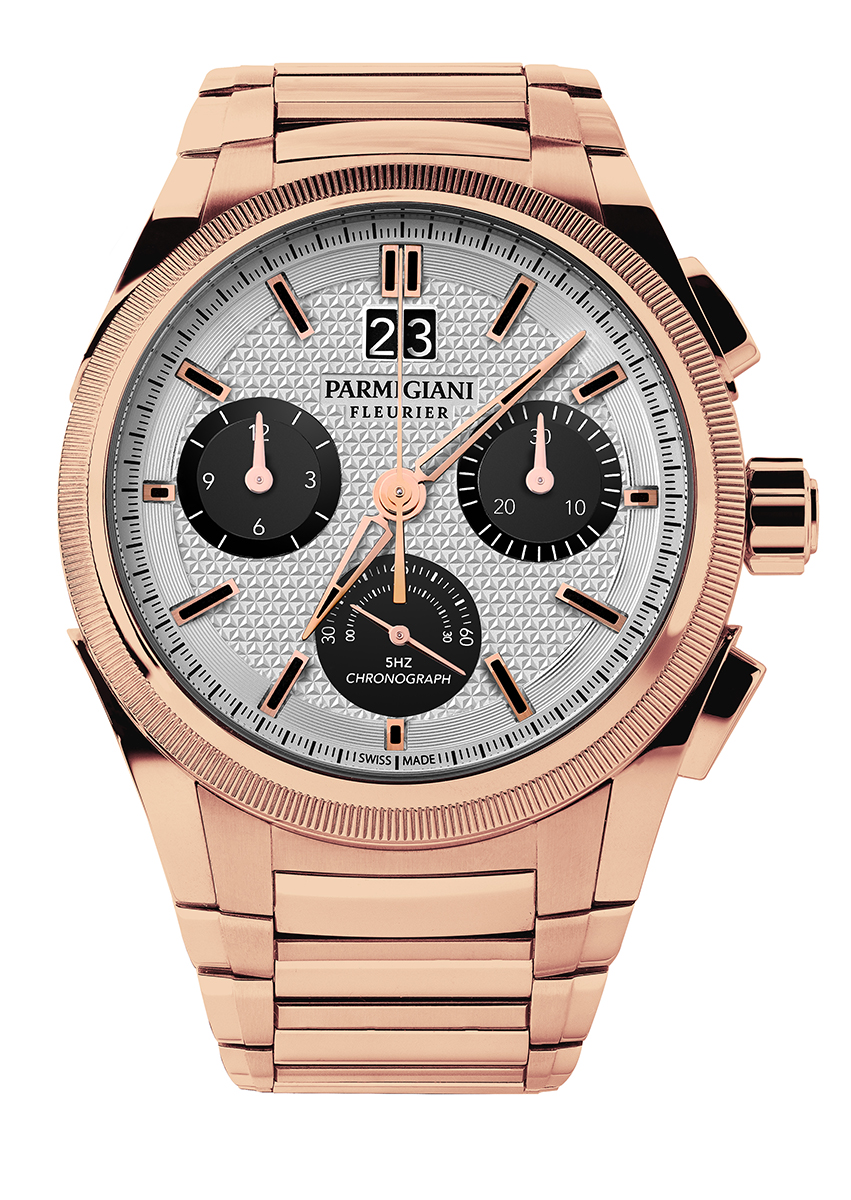 Inside the Tondagraph GT Rose Gold Silver Black, and visible through a sapphire caseback, is the in-house Caliber PF071, a COSC chronometer-certified movement based on Parmigiani’s groundbreaking and GPHG-awardwinning Caliber PF361 and storing a 65-hour power reserve. The integrated chronograph function uses a column wheel rather than a cam, for smoother operation, and a vertical clutch rather than a horizontal one, which increases accuracy by enabling the chronograph to start without an initial jolt. The movement incorporates a crossbridge instead of a single attachment to better stabilize the balance, whose high frequency of 36,000 vph (5 Hz) means the stopwatch can measure intervals up to 1/10 second. Few modern chronograph calibers can boast this level of accuracy. While this version of the Tondagraph does not include annual calendar functionality, it features the big date as an additional integrated feature, rather than a modular addition, which makes for better technical reliability. Like all Parmigiani Fleurier movements, Caliber PF071 is enhanced with chamfering and polishing done by hand, sandblasted surfaces, a sunray pattern on the 22k gold oscillating weight, and beautifully hand-finished bridges. Every component is made within the walls of Parmigiani Fleurier’s watchmaking hub, making it a true manufacture caliber. The watch joins Parmigiani Fleurier’s regular collection and is not a limited edition. 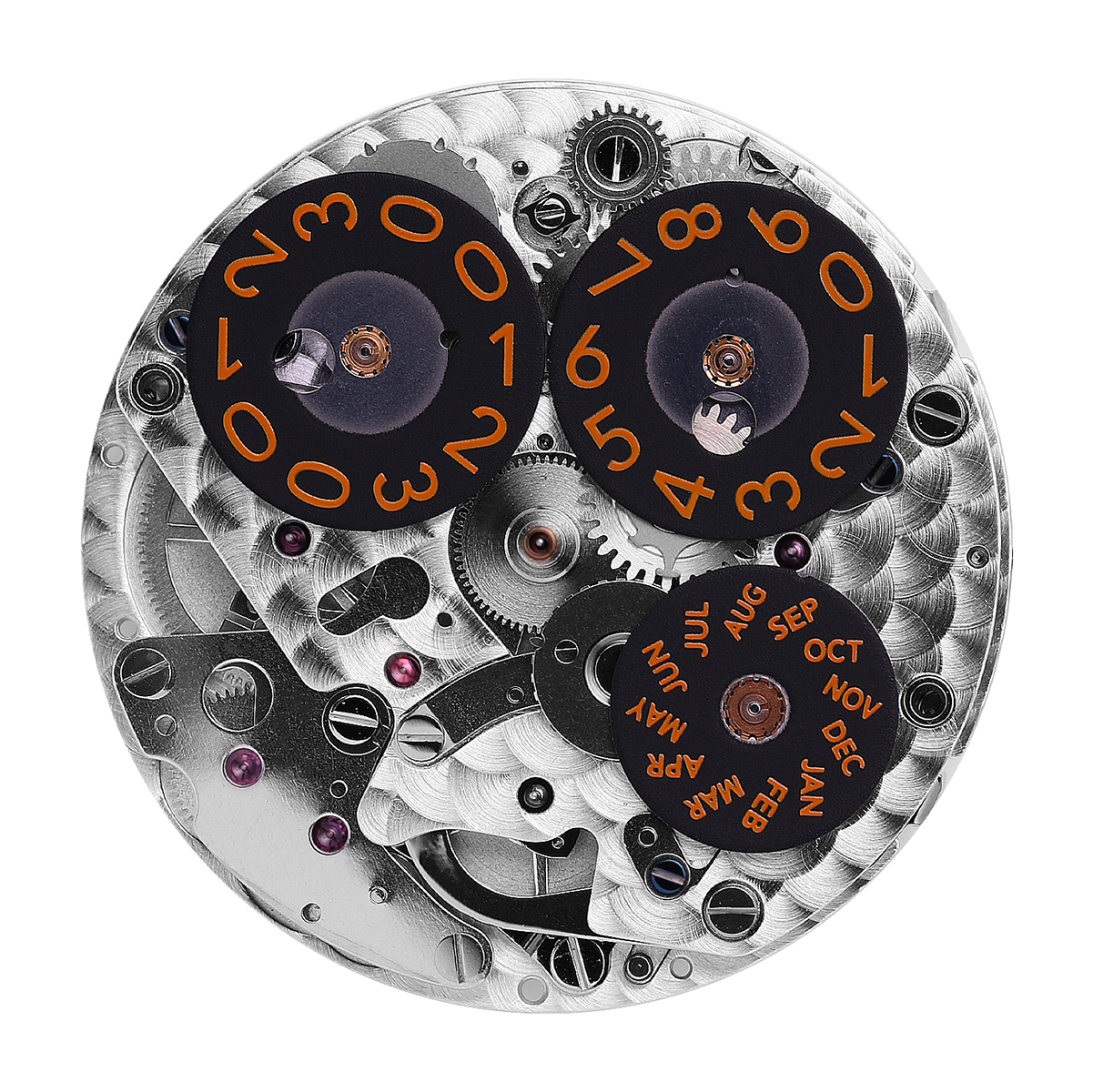 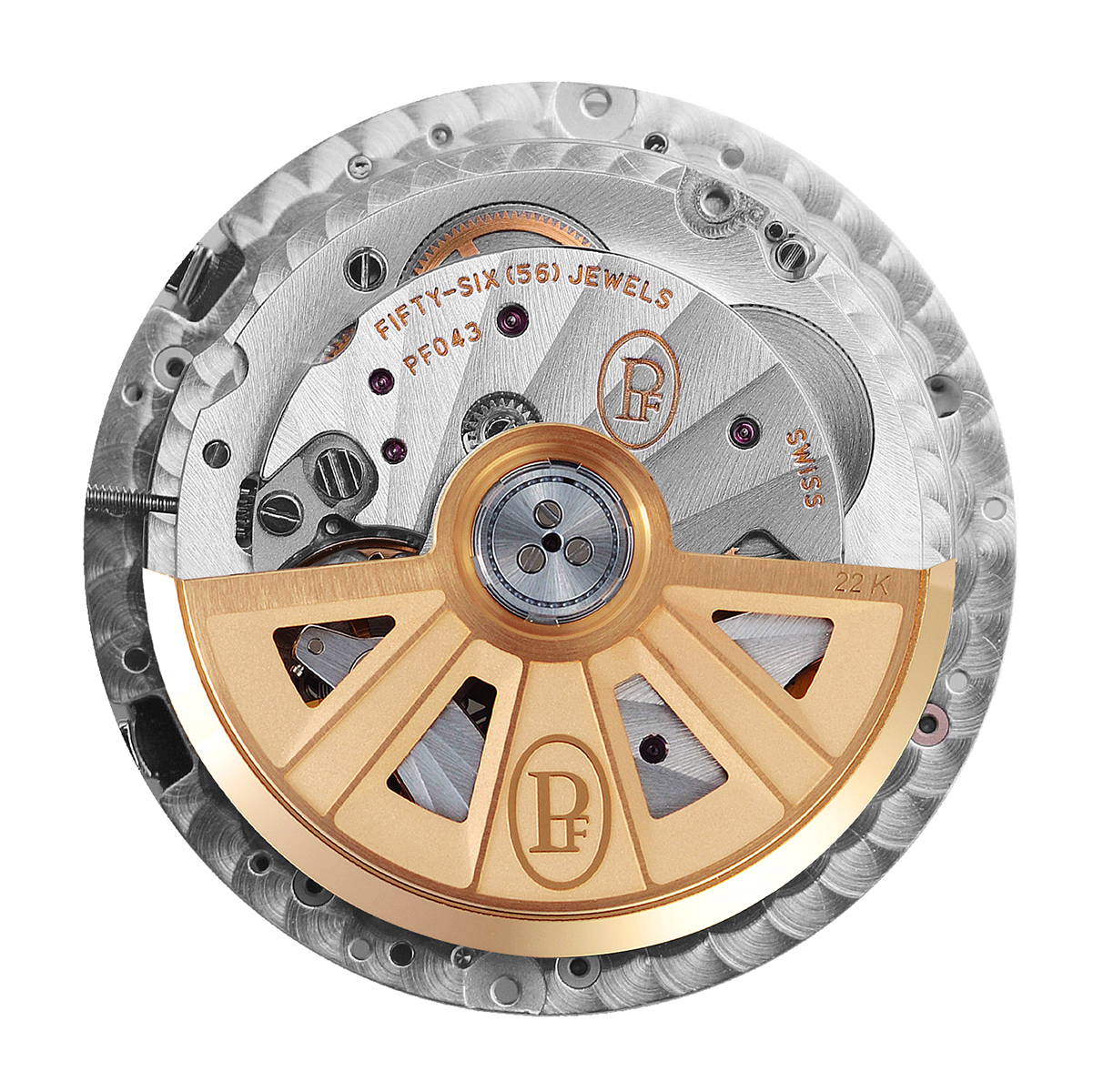 “The arrival of the Tonda GT has expanded our audience and rejuvenated the existing collection for more modern tastes,” Terreni states. “Its launch created momentum for the brand in a very difficult year and offers an opportunity for many new potential customers to enjoy Parmigiani Fleurier. Now the classical aesthetics of a silver-and-black dial, a monochromatic case in steel or in gold, and an integrated bracelet, bring a new level of freshness to the collection, and the subtle enhancements on these new models demonstrate how we can take their sophistication even higher.”