Powering the hour, minute and second indications is the innovatively engineered, superlatively hand-finished in-house Calibre 2206 HMS, on full show through the display back and wound using an ingenious large-diameter crown configured ‘flat’ on the caseback.

The meteorite used to make the dial is an octahedrite – an iron meteorite – that was discovered in 1931 at the Henbury crater field in the Northern Territory of Australia, one of the country’s best known meteorite impact sites.

To make the dial, a combination of three-axe machining centre and electrical discharge machining is used to a create a disc of the meteorite that is 33mm in diameter and 0.8mm thick. An anti-corrosion treatment is applied to ensure its appearance will not deteriorate over time.

Apart from the piece used here, the only other known sample of this Henbury meteorite is housed in the South Australian Museum of minerals, meteorites and rocks in Adelaide.

Indeed, this particular meteorite specimen is extremely rare and it is remarkable for the coarseness of its nickel-iron crystal bands, also called lamellae, producing a really eye-catching Widmanstätten pattern. As the angle at which the observer looks at the dial changes, the many lamellae shimmer, lending the dial a real vivacity.

Romain was drawn to this meteorite not least because he grew up in a household surrounded by rocks and minerals collected by his father. 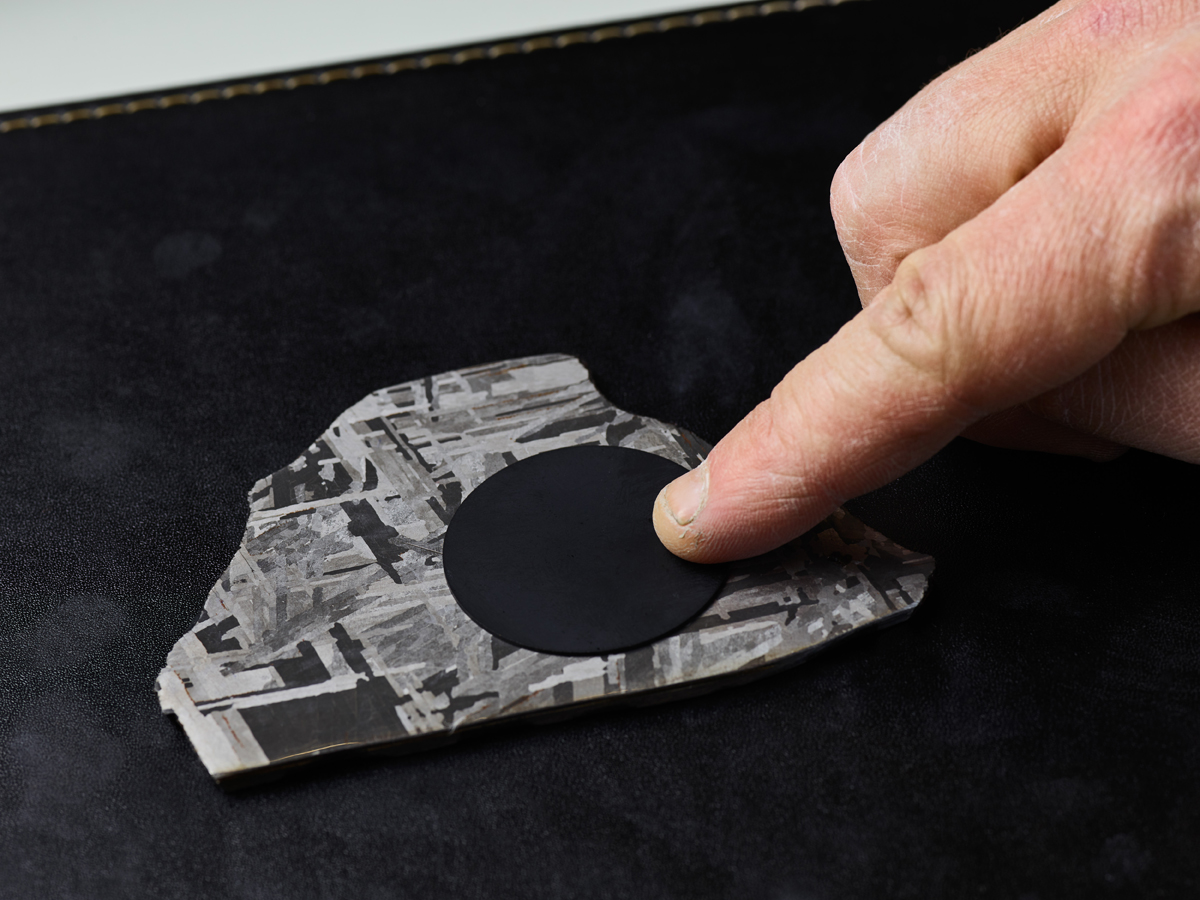 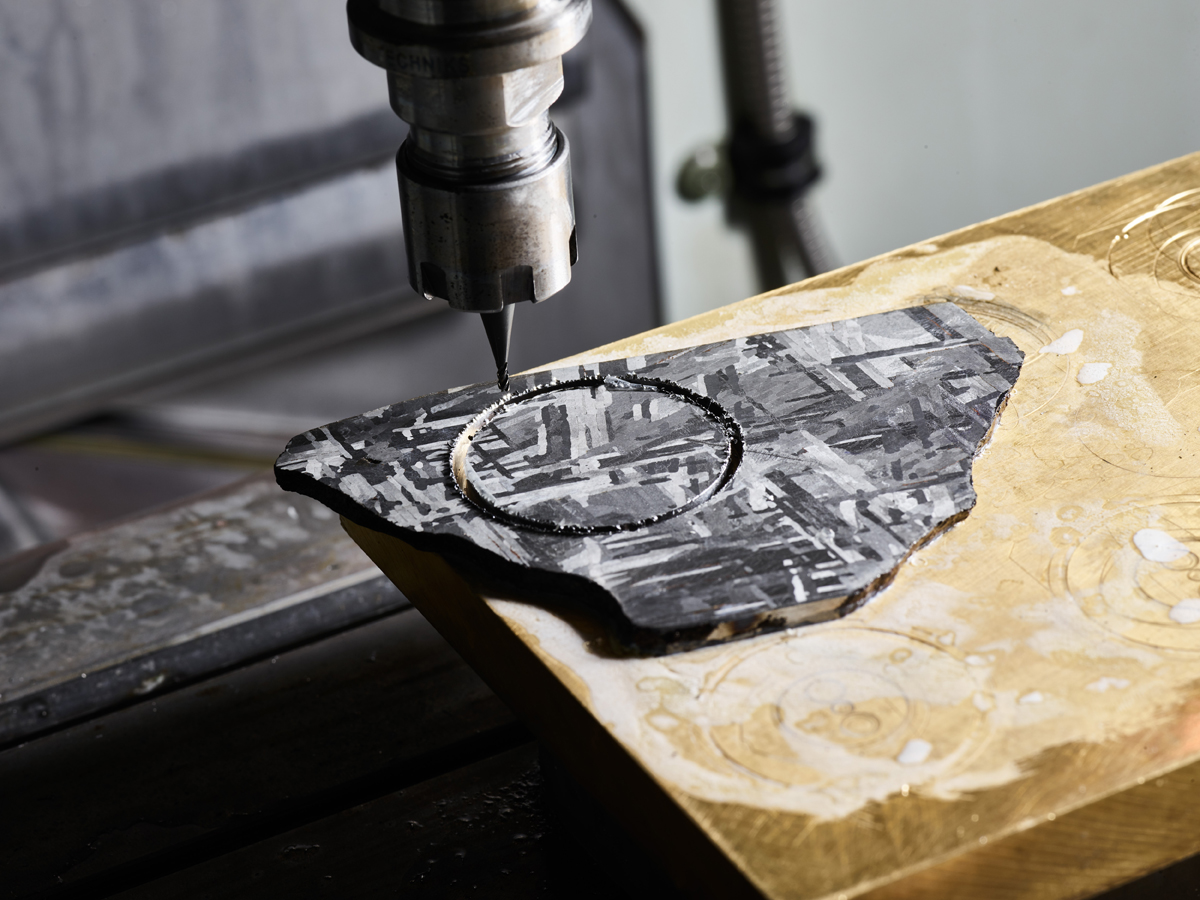 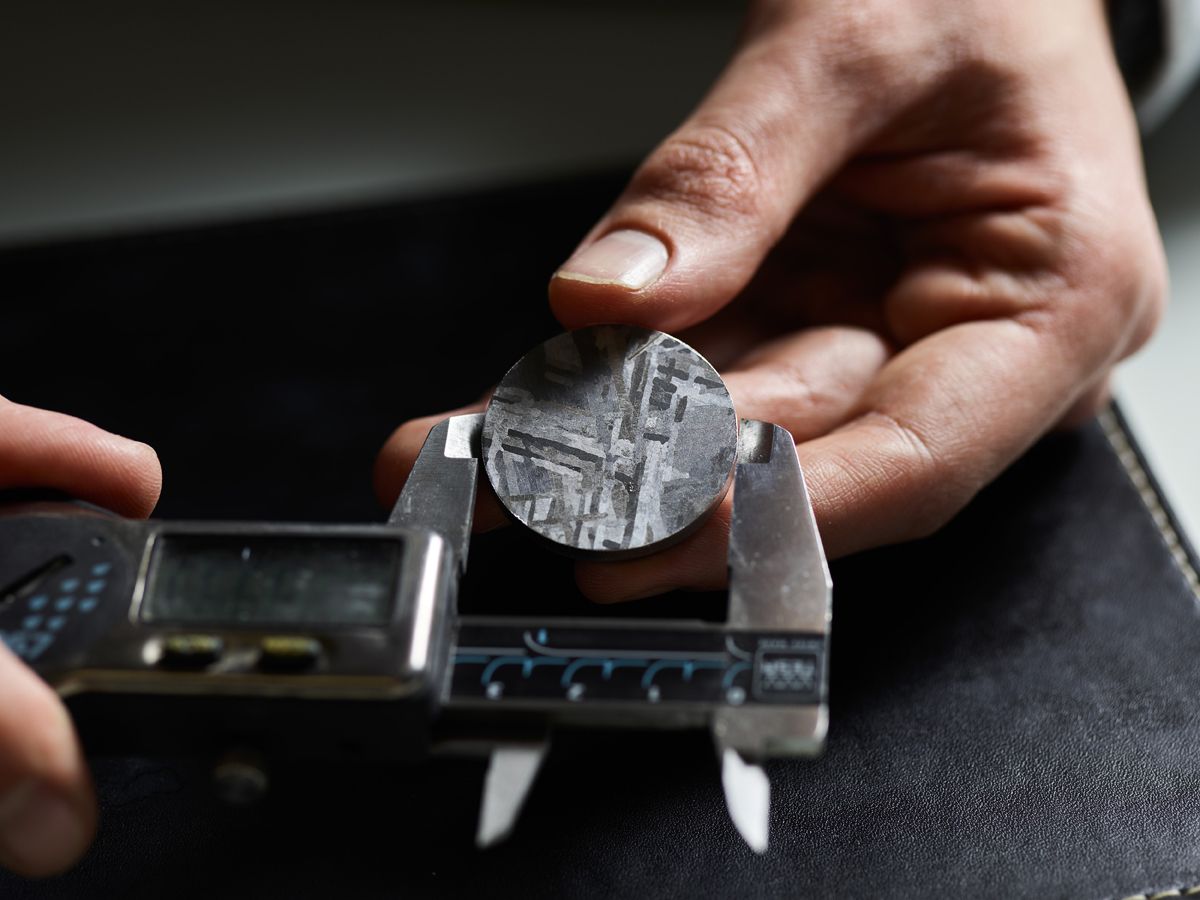 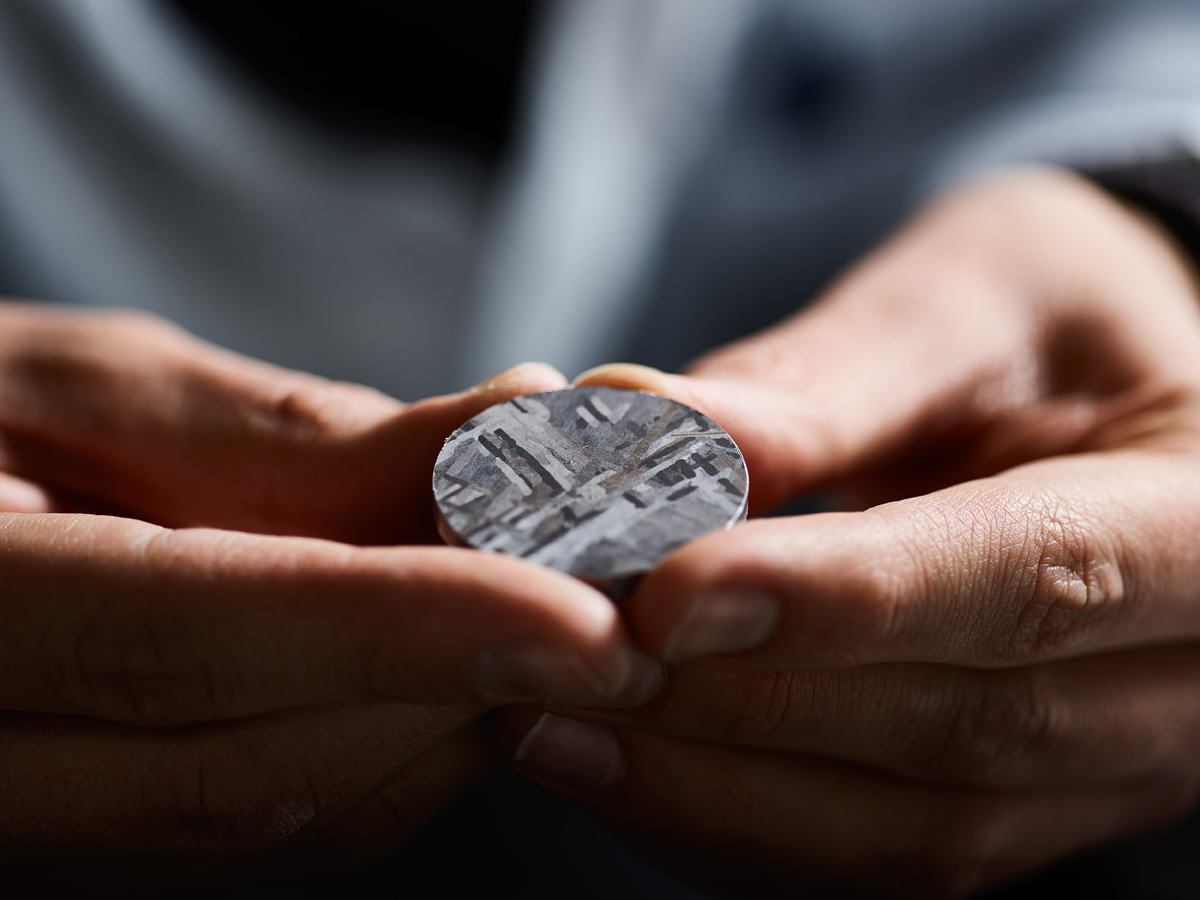 The HMS of Prestige HMS stands for hours, minutes and seconds. Hours and minutes are displayed in the large subdial at 12 o’clock, with small seconds at 5 o’clock. This 5 o’clock position makes for an easy reading of time: Once the wearer reads the hour-minute subdial, their eye is then naturally drawn to the seconds display.

The hands are all in blackened steel, with the hour-minute hands Super-LumiNova-filled to stand out against the shimmering meteorite backdrop, while the white gold applique hour markers also feature this lume for greater legibility at night.

The 43mm-diameter stainless steel case is distinguished by pure, clean, unbroken lines around its full perimeter. It is the absence of a ‘normal’ crown protruding at 3 o’clock that signals something special might be going on around the back of the watch.

Prestige HMS is wound using a ‘flat’ crown on the caseback. This increases winding efficiency because, unlike a traditional caseband crown, energy need not be transmitted through 90°. The large diameter and undulating profile of the crown enable effortless winding, even while on the wrist. The crown is pulled out for time-setting.

The crown system features a tiny ceramic ball and rubber spring. This combination handles the radial and axial forces exerted during winding and time-setting better than a conventional crown spring would, while the ceramic used for the ball is resistant to wear and reduces friction for a smooth functioning. Two o-ring seals – one of which is oversized – provide the necessary waterproofing and dust protection, especially when the crown is pulled out to set the time.

Contrasting finishes have been applied to enhance the stainless steel case: The bezel and caseband are sumptuously polished, while the caseback, crown and front and back of the lugs bear a subtle sheen, having been satin finished. 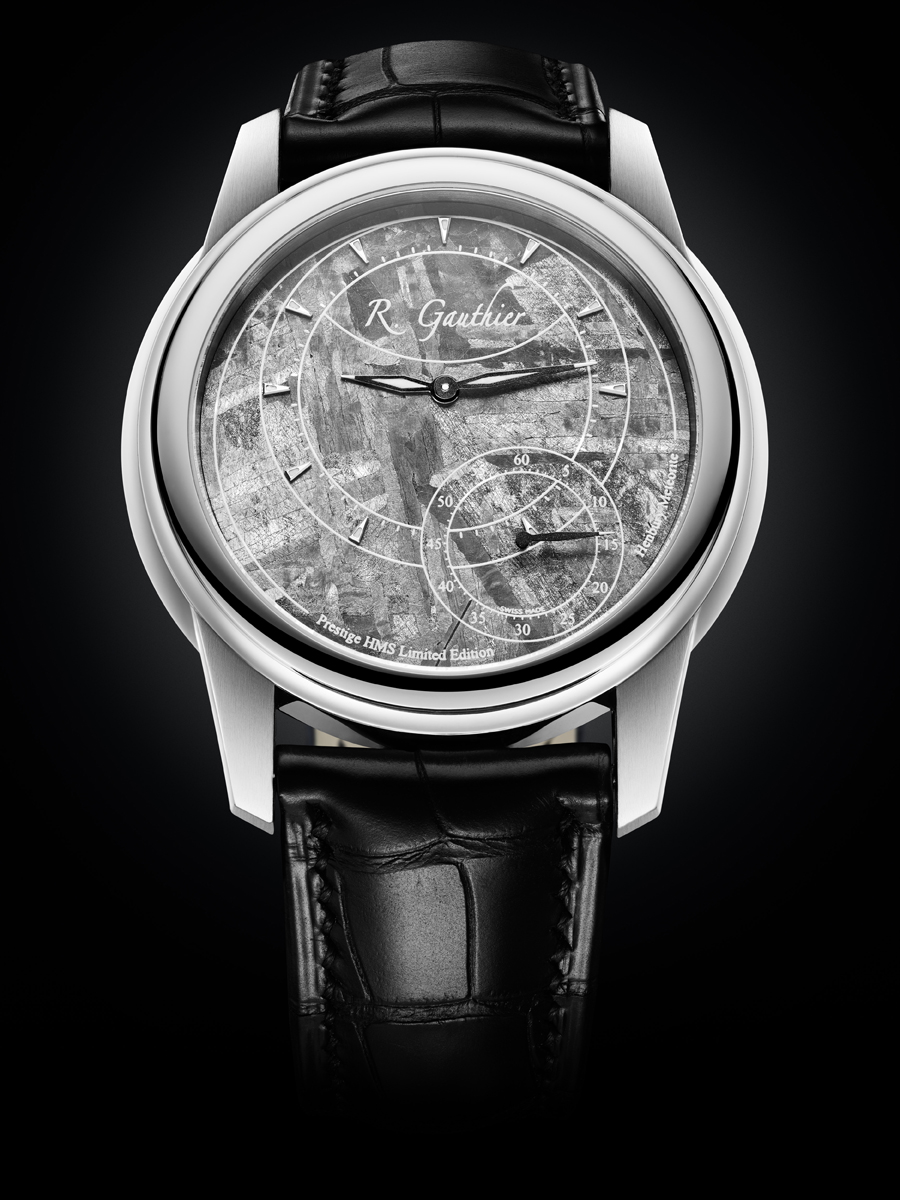 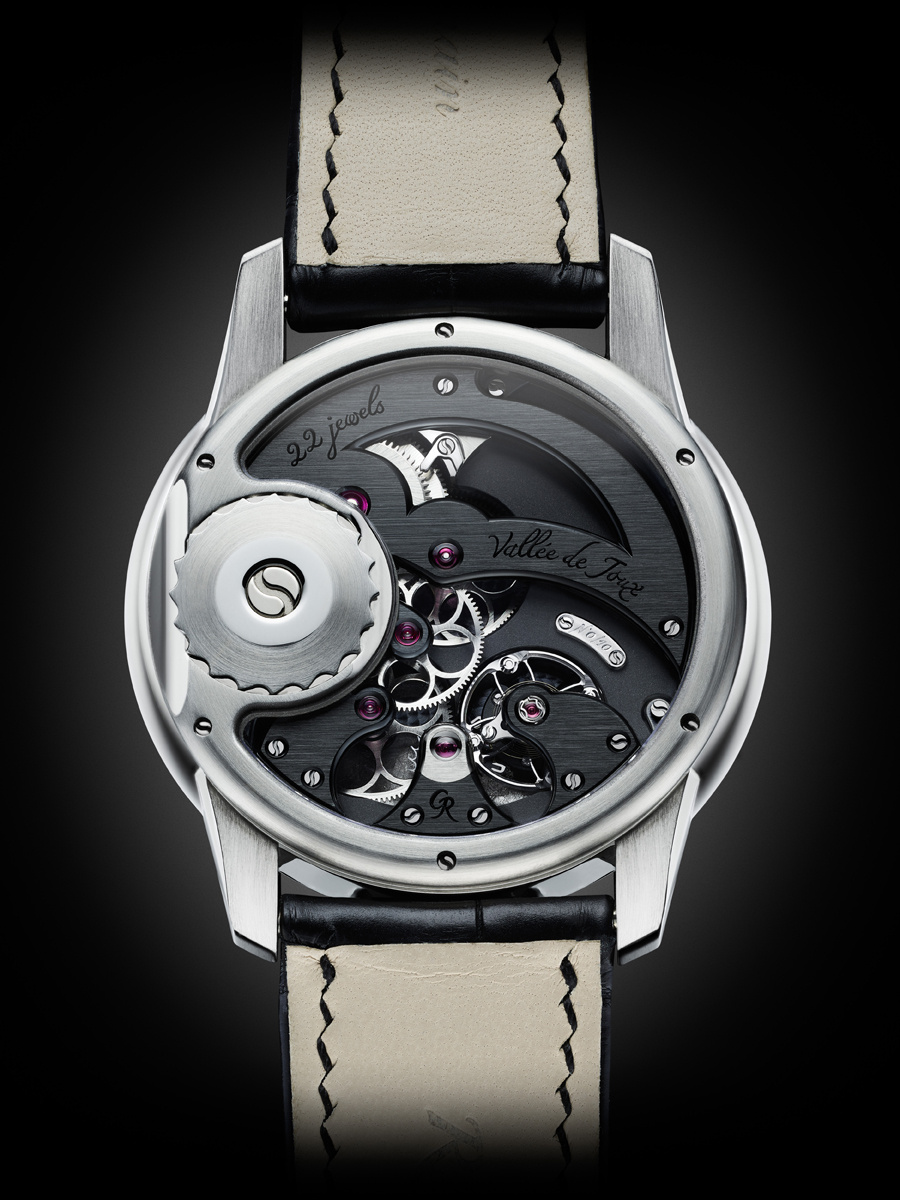 Turning over the watch, it is not just the caseback crown that we see, but also the Calibre 2206 HMS on show through the display back. This movement – boasting a 60-hour power reserve – was developed, produced, decorated, assembled and regulated at Manufacture Romain Gauthier in the Vallée de Joux, Switzerland. Virtually every component bears Romain’s distinctive touch.

The movement adheres to the watchmaking tradition of Romain’s native Vallée de Joux by mainly having one mobile for each bridge (a mobile being a gear on a pinion or shaft). These finger bridges feature polished, rounded bevels that have been meticulously created by hand, as well as hand-chamfered and hand-polished jewel countersinks.

The movement architecture is such that the observer can even see through the components to glimpse the disc of meteorite forming the dial.

Prestige HMS Stainless Steel is a limited edition of 10 pieces.