Created in 1931, at the height of Art Deco period, the Reverso was developed to meet the demands of the newly fashionable ‘sporting gentleman’ – specifically, the polo player. A masterful integration of form and function, with its clean lines and flip-over case, it has become one of the world’s most recognisable watches.
Soon after its introduction, as the Reverso was adopted by tastemakers from all walks of life, new variations appeared. Even before the Reverso’s first anniversary, coloured dials were introduced, creating a vivid contrast with the case metal and adding a note of exuberance to its streamlined symmetry. This new limited edition recalls that early use of colour, to further enrich the Reverso story. 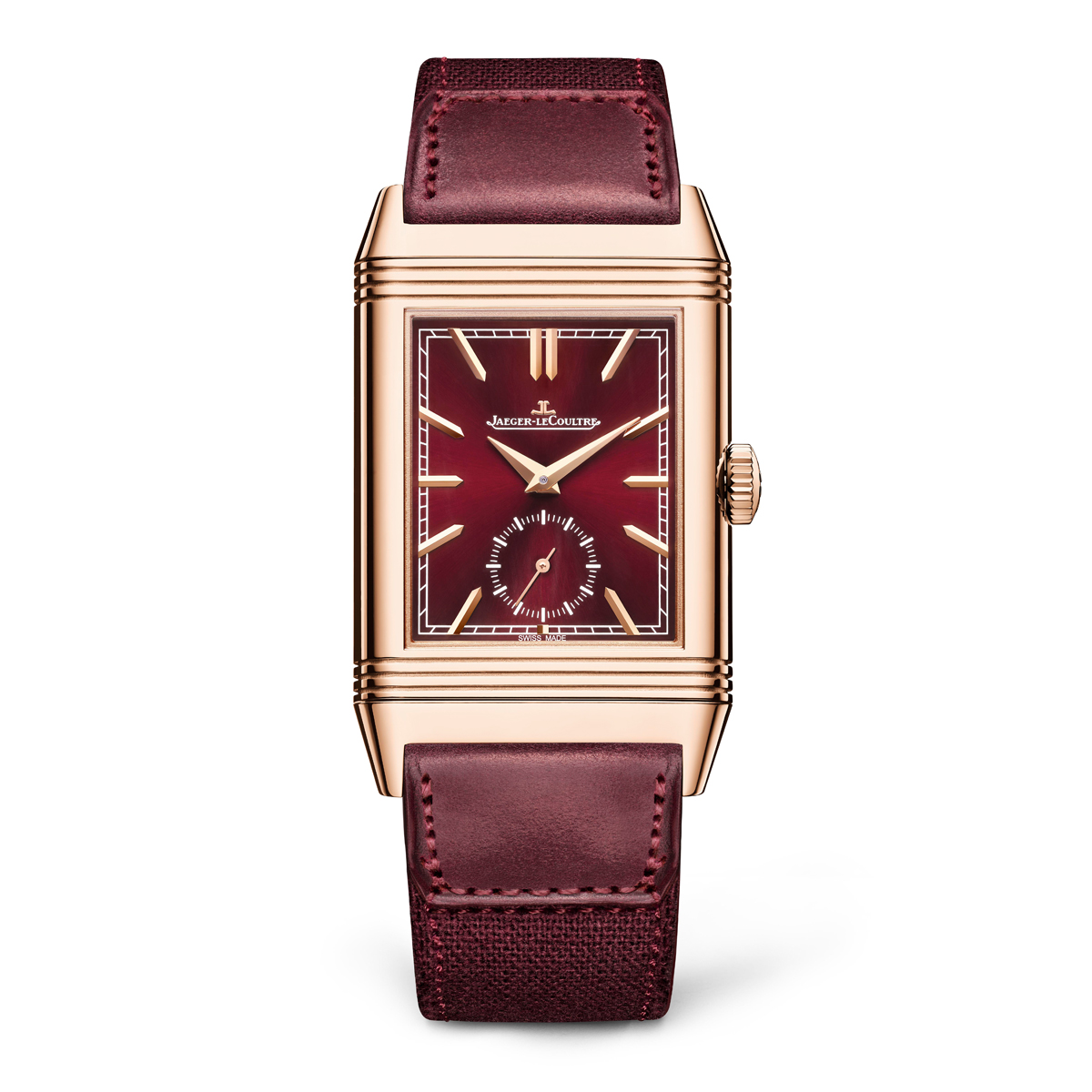 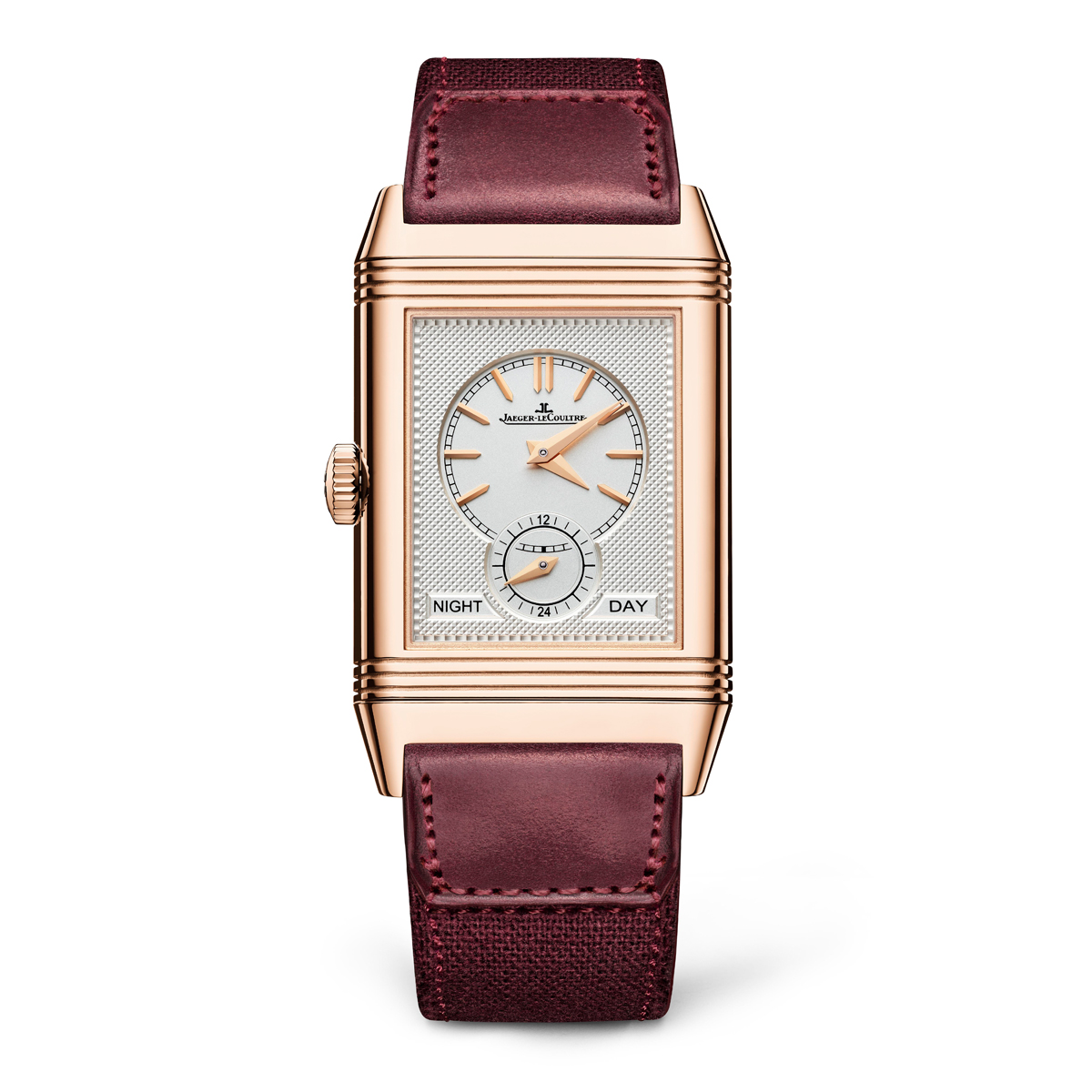 Marrying the dual-time zone complication of the Duoface with the aesthetic of the Tribute collection, the new timepiece is complemented by an original strap, specially designed and hand-crafted by Casa Fagliano, the world-famous Argentinian maker of polo boots.
Originally developed in 1994, the Duoface offers two contrasting dials, each displaying a different time zone, thanks to the hand-wound Calibre 854A/2. To maintain the perfect integrity of the case design, the second time zone is adjusted by a small slider set into the top case-band and completely invisible except when the case is released from the carriage to be flipped over. A deeply etched sunray pattern on the inner surface of the carriage adds to the visual enjoyment of turning the watch over. 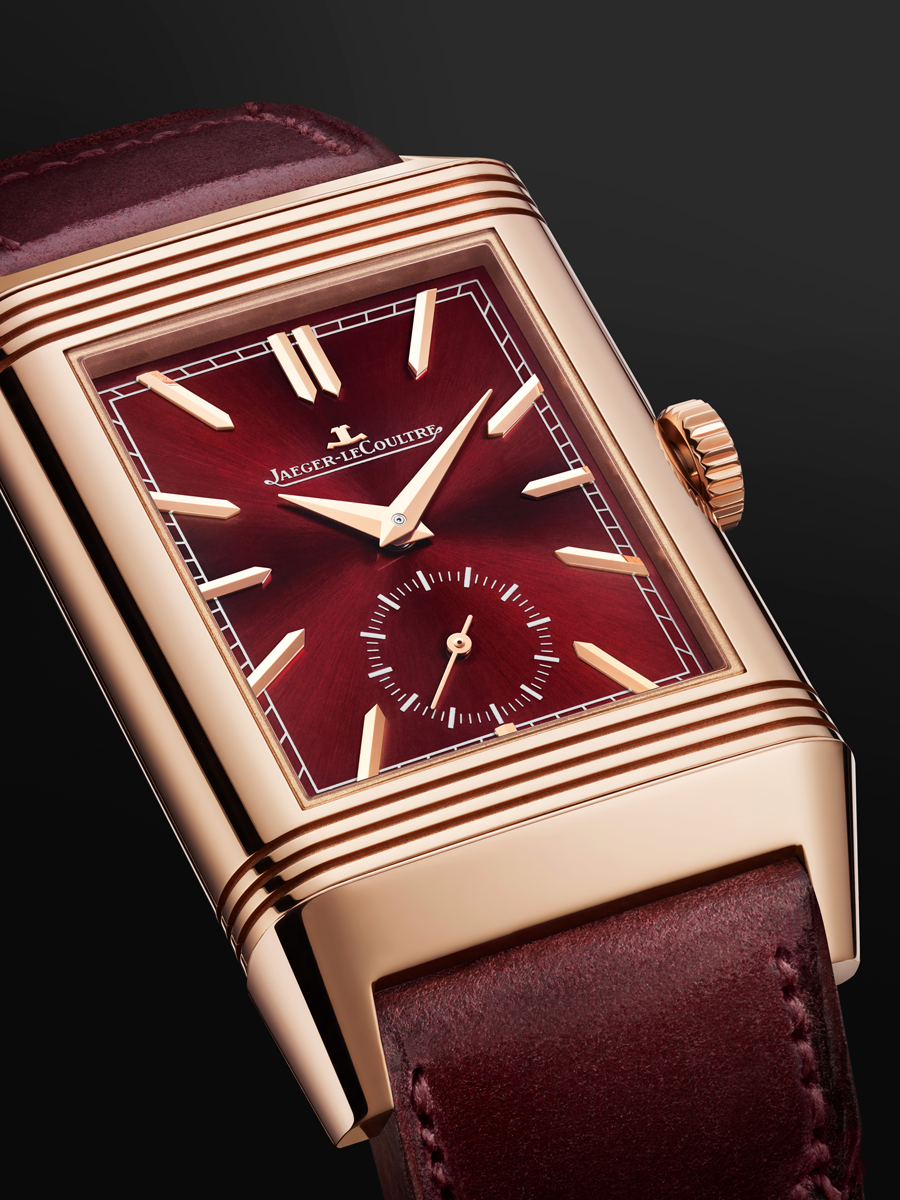 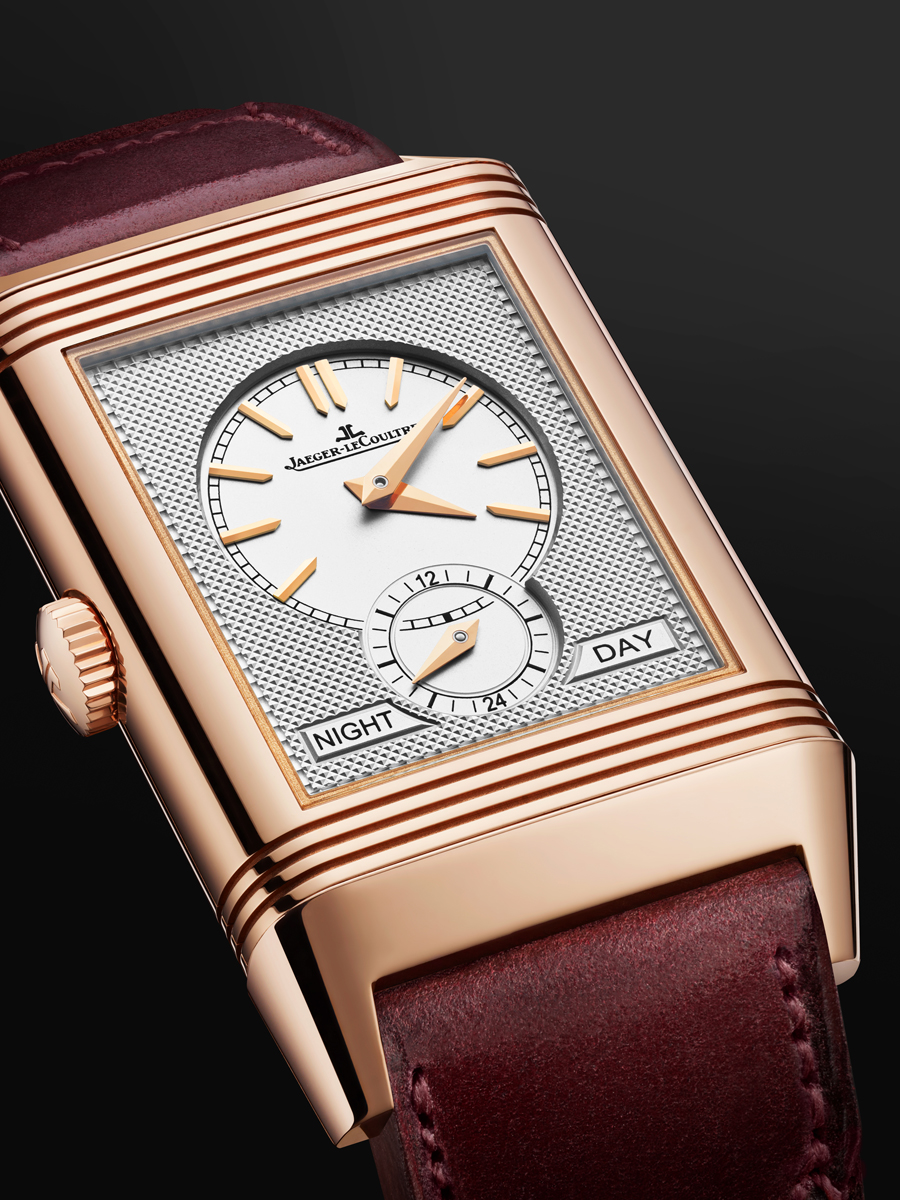 On the front dial, in keeping with the original Reverso design, the hours are marked by straight indexes, doubled at 12. Their faceted shape adds visual depth to the rich burgundy-red of the lacquered surface and echoes the form of the Dauphine hands. The circular track of the small seconds display at six o’clock provides a counterpoint to the linear geometry of the dial and case.

The design of the reverse dial plays on the tension between circles and straight lines, anchored by contrasting decorative finishes. The stippled texture of Clous de Paris guillochage contrasts with the gleaming opaline finish of the central time display and the smaller circle that displays the day-night indication. 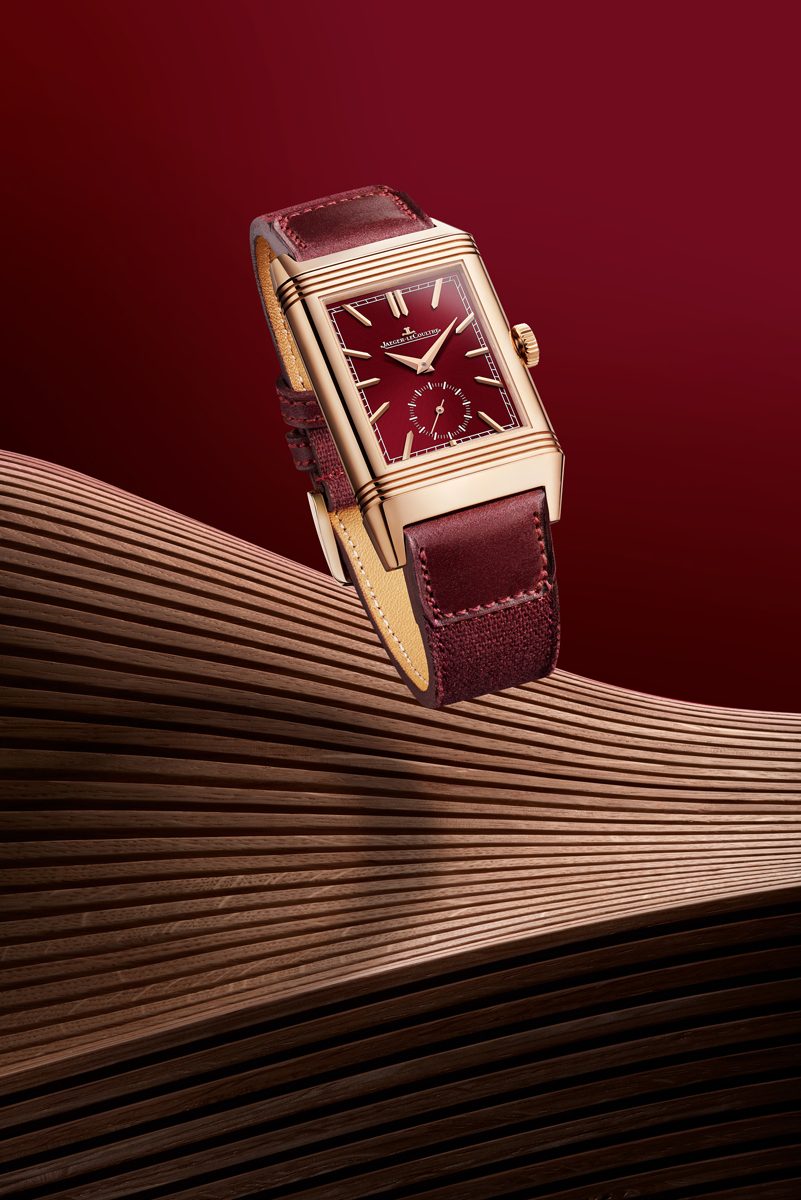 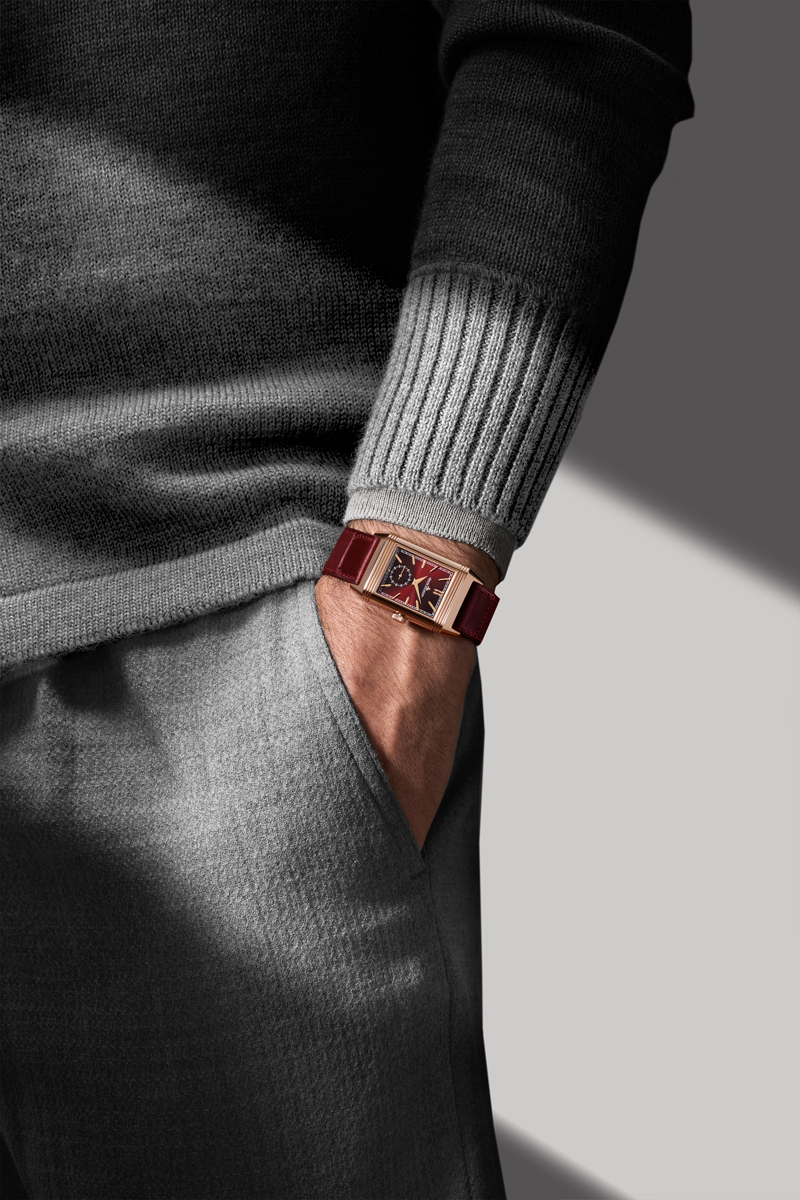 Both dial treatments are balanced by the warm tones of the pink gold case which, in turn, is complemented by the two-tone strap. Inspired by the canvas-and-leather boots that it makes for summer polo, Casa Fagliano combined cordovan leather and canvas for the new strap – as always, cutting and stitching every piece by hand.