The car originally belonged to Carl Eduard Bucherer, the son of our founder, Carl Friedrich Bucherer. It changed hands several times over the years. In 2013, however, Jörg G. Bucherer, Carl Eduard’s son, was able to buy the family car and have it restored to its original glory. The new watch, with color details inspired by the restored automobile, is a tribute to the Bucherer family, to a remarkable automobile, and to Carl F. Bucherer’s hometown of Lucerne.

The Bucherer Group’s chairman, and sole owner, Jörg G. Bucherer, owns a vintage 1949 Lincoln Cosmopolitan Town Sedan with a remarkable history. The automobile had, in fact, originally belonged to his father, Carl Eduard Bucherer, who was the son of Carl Friedrich Bucherer, the founder and namesake of the prestige Swiss watch manufacturer. The family car made quite an impression on young Jörg, who was 13 years old at the time. It was sold in 1952 and changed hands several times over the years, but Jörg G. Bucherer bought it back in 2013 and had it restored to its original glory. Now, 72 years later, it makes a profound impression on everyone who sees it navigating Switzerland’s highways and byways.

Carl F. Bucherer CEO Sascha Moeri enjoys the story and says: “This is such an incredible narrative. All of us who have been privileged to work closely with Jörg G. Bucherer over the years know how much this car means to him. Our designers and watchmakers took inspiration from the automobile and created a great timepiece that pays homage to the Chairman of the Bucherer Group, to his passion for the family car that returned to his life after so many years, and, of course, to our beloved hometown of Lucerne, the place where the car and the Bucherer family have shared such an extraordinary history.” 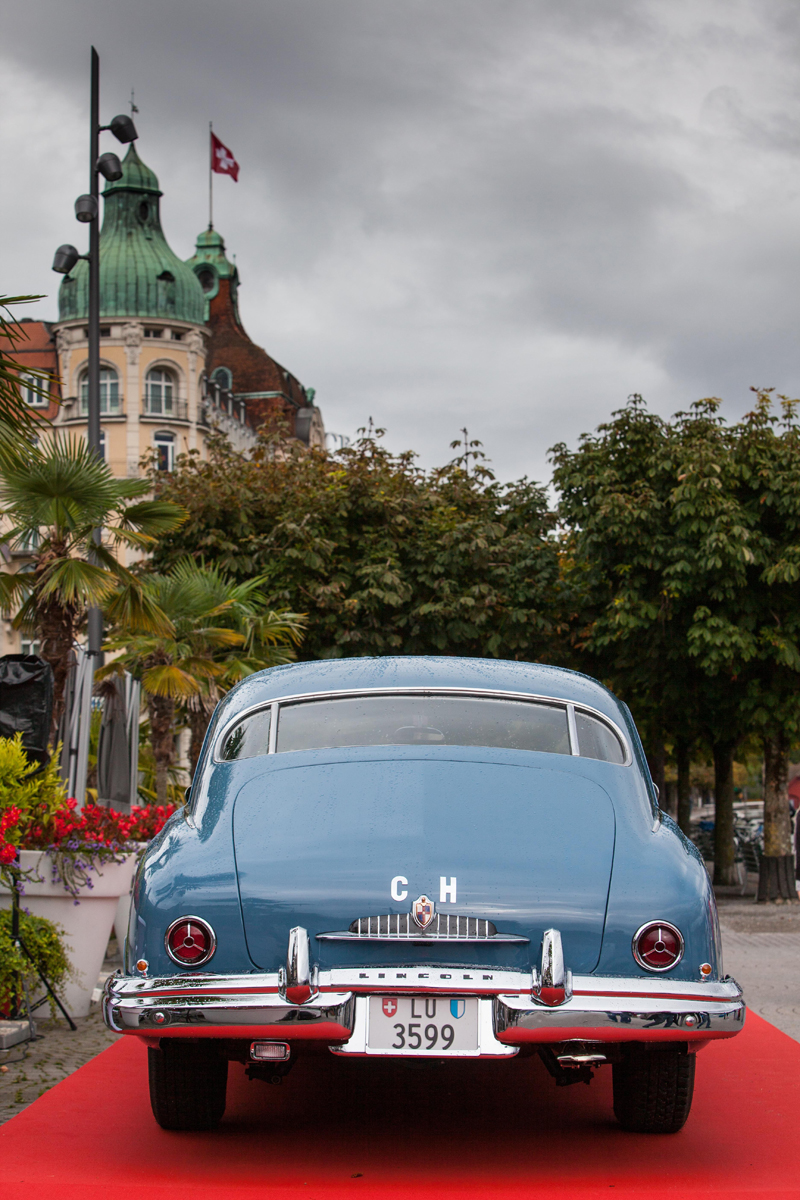 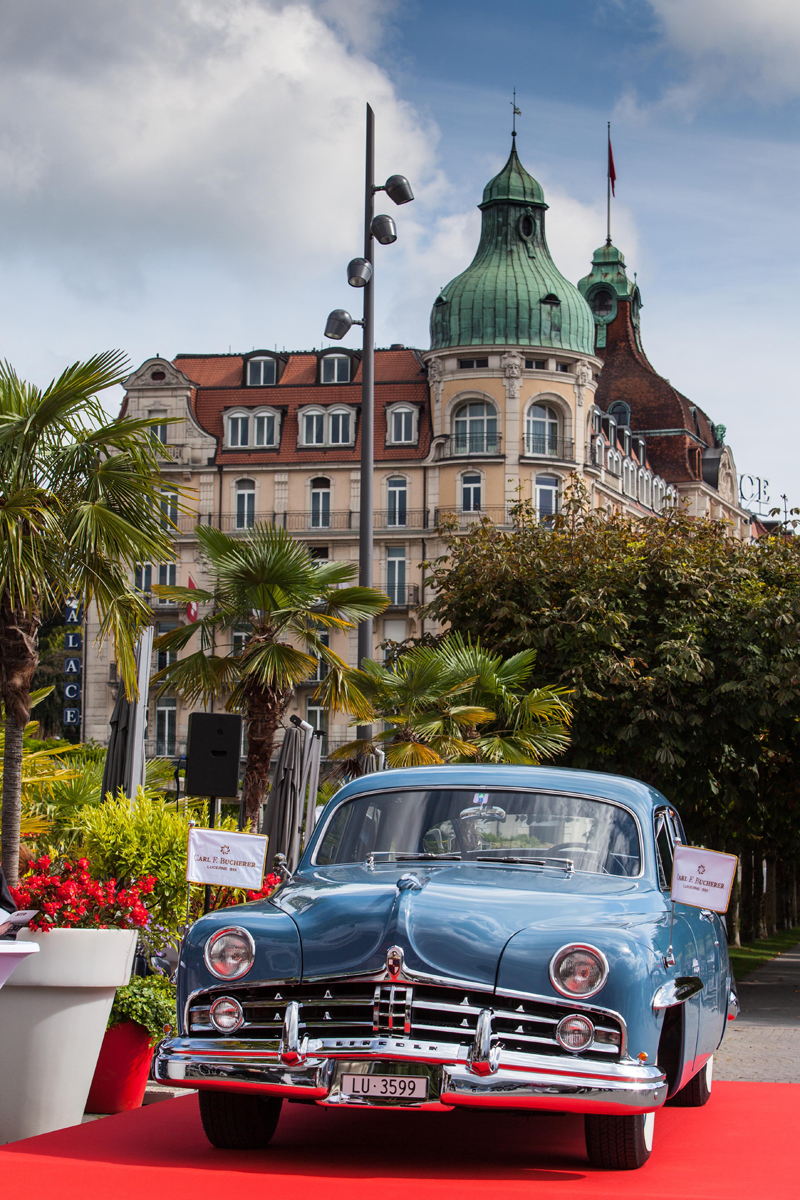 Such an evocative story is worthy of a special watch, and Carl F. Bucherer honors its founding family – and their vintage Lincoln Cosmopolitan – with the Heritage BiCompax Annual Lucerne. This watch, produced in an edition limited to 188 pieces, is a celebration of the Bucherer family and its connection to classic cars. It is also an homage to the brand’s hometown of Lucerne.

The Carl F. Bucherer Heritage BiCompax Annual Lucerne has a 41 mm stainless steel case presented on a multi-link Milanese stainless steel bracelet with a folding clasp and a quick release system. In addition, it is delivered with a calfskin leather strap with a folding clasp, which also has a quick release system, so the look can be changed quickly and easily according to the wearer’s choice of outfit and plans for the day. 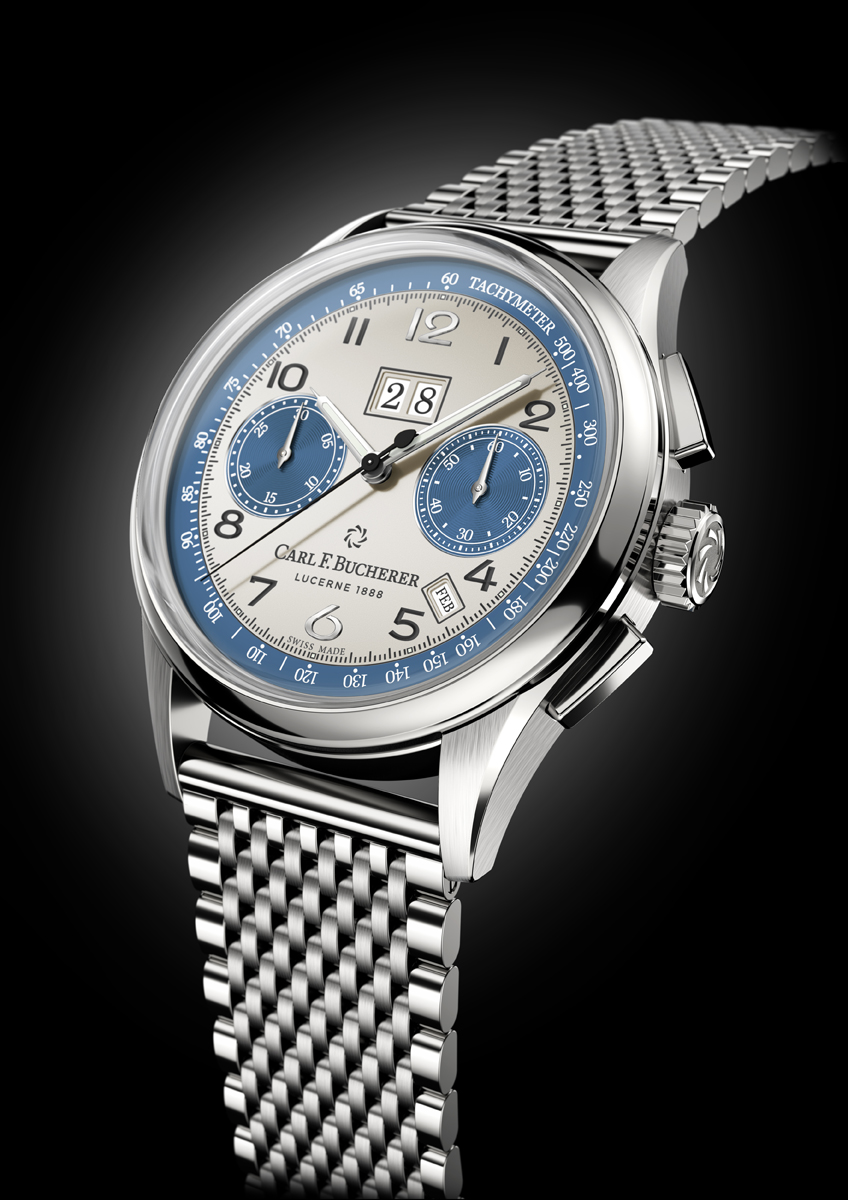 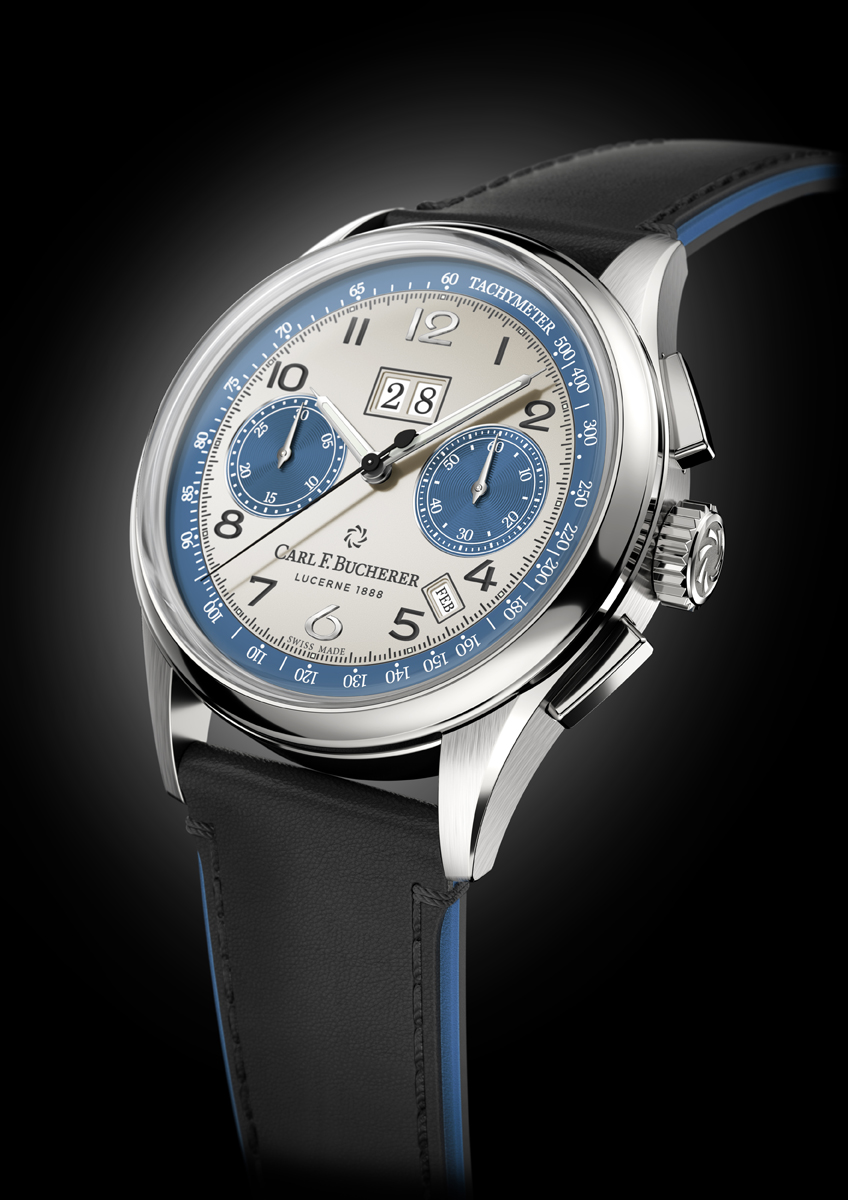 The silver-colored dial on display through the double-domed sapphire crystal features light blue subdials with chronograph minutes and small seconds counters, which are complemented by a light blue ring with a tachymeter scale surrounding the dial. The light blue recalls the color of Jörg G. Bucherer’s lovingly restored automobile. The watch’s dial also boasts a month aperture between 4 and 5 o’clock and a bold big date window just below 12 o’clock. 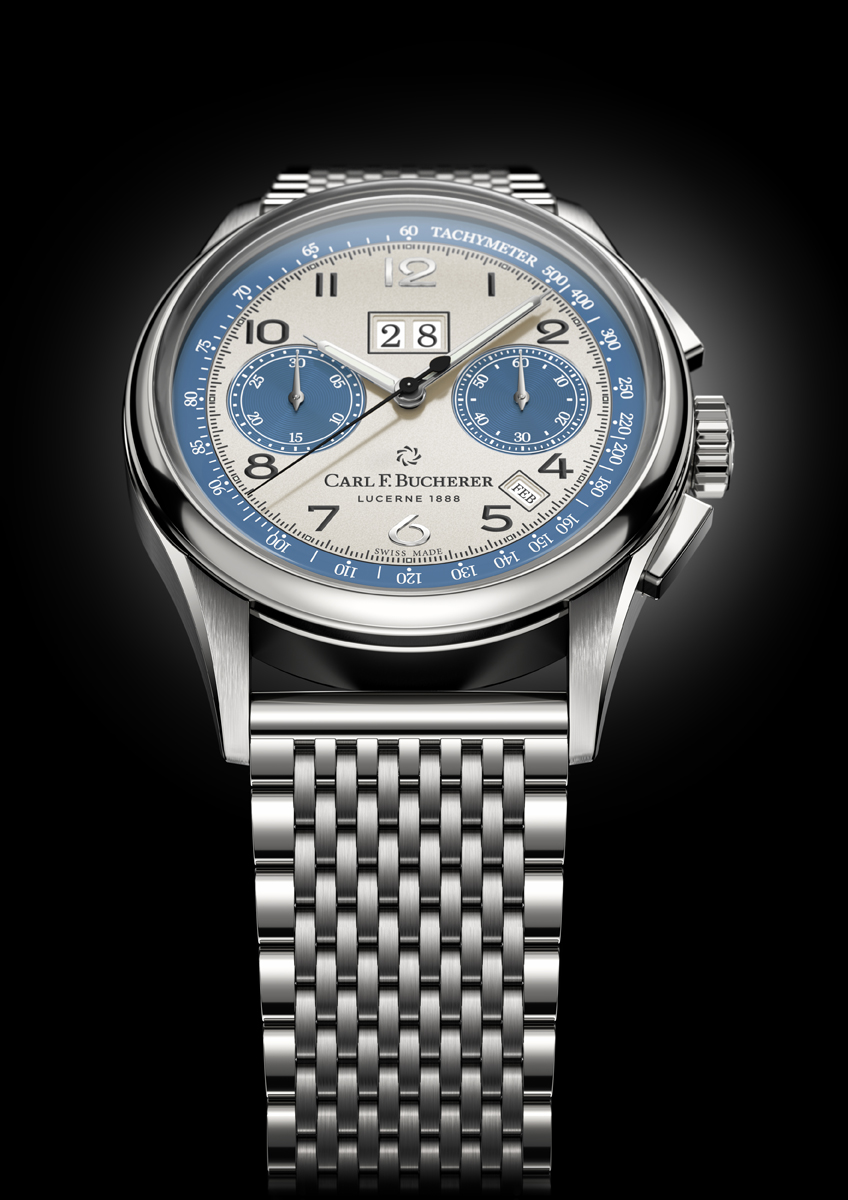 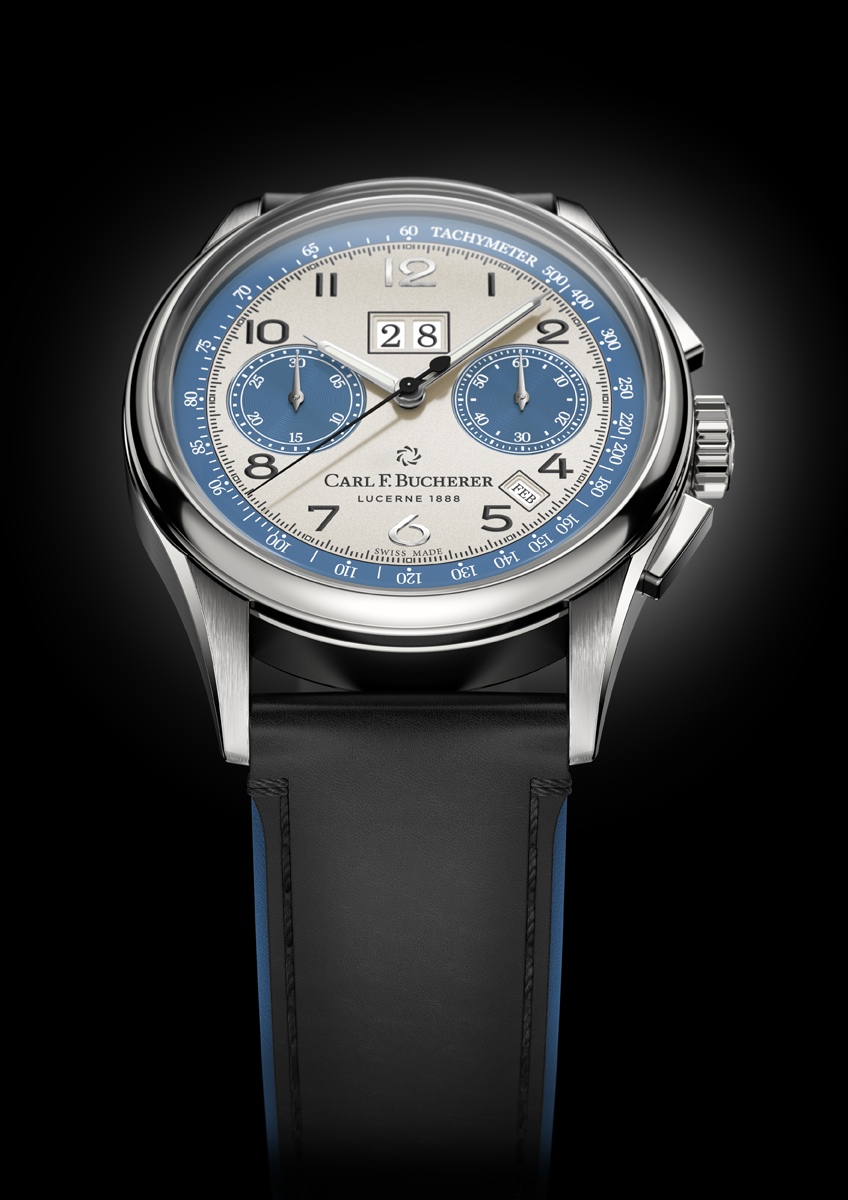 Although the Heritage BiCompax Annual Lucerne recalls some of the finest timepieces from an earlier era, the mechanical movement at the heart of the watch is a contemporary masterpiece. The CFB Caliber 1972 automatic chronograph has a power reserve of 42 hours, and its annual calendar complication accounts for different month lengths – 30 and 31 days – so the date only has to be corrected once a year, on March 1.

The Carl F. Bucherer Heritage BiCompax Annual Lucerne is a watch inspired by a vintage automobile that has played an important role in the lives of two generations of the Bucherer family. It is a fitting tribute from a great brand to its founding family and their cherished automobile. With its classic design appeal, its chronograph and annual calendar complications, this watch has a dial that will catch every eye in the room and is a stunning nod to the city of Lucerne.