Greubel Forsey
0
Already in 2015, the GMT Black paved the way for the GMT Sport. Building on this foundation, Robert Greubel and Stephen Forsey have invented and now present the result, a lightweight and ultra-strong, profiled titanium case with ovoid bezel and integrated lugs to showcase the new movement.

Waterresistant to 100 meters, the new GMT Sport stands out as their most sport oriented timepiece to date. The movement was constructed from scratch – from the suspended arched bridge for the hours and minutes display, to the unique showcase of the Tourbillon 24 Secondes and the universal time display with three dimensional globe. Another truly assertive Greubel Forsey – and a revolution: the successful alliance between ergonomics, technicity and architecture.

The completely new and original titanium case, firmly positions this new GMT in a “sports” league of its own. In their creation of this timepiece, Robert Greubel and Stephen Forsey have pushed back the limits of ergonomics and wrist comfort. They have invented a totally new case form, perfectly round from above, while revealing the accentuated arched and ovoid shape from other angles. The aerodynamics of this timepiece 4 patents are reinforced by its integrated lugs and strap resulting in distinct functional forms that perfectly fit any wrist. The sweeping satinfinished bezel with Greubel Forsey’s values relief engraved on its outer bevel, follows this unique case shape. The curved profile of the 45 mm diameter case and ovoid sapphire crystal provide the perfect showcase for an entirely new movement architecture with an arched bridge and inclined gear train. 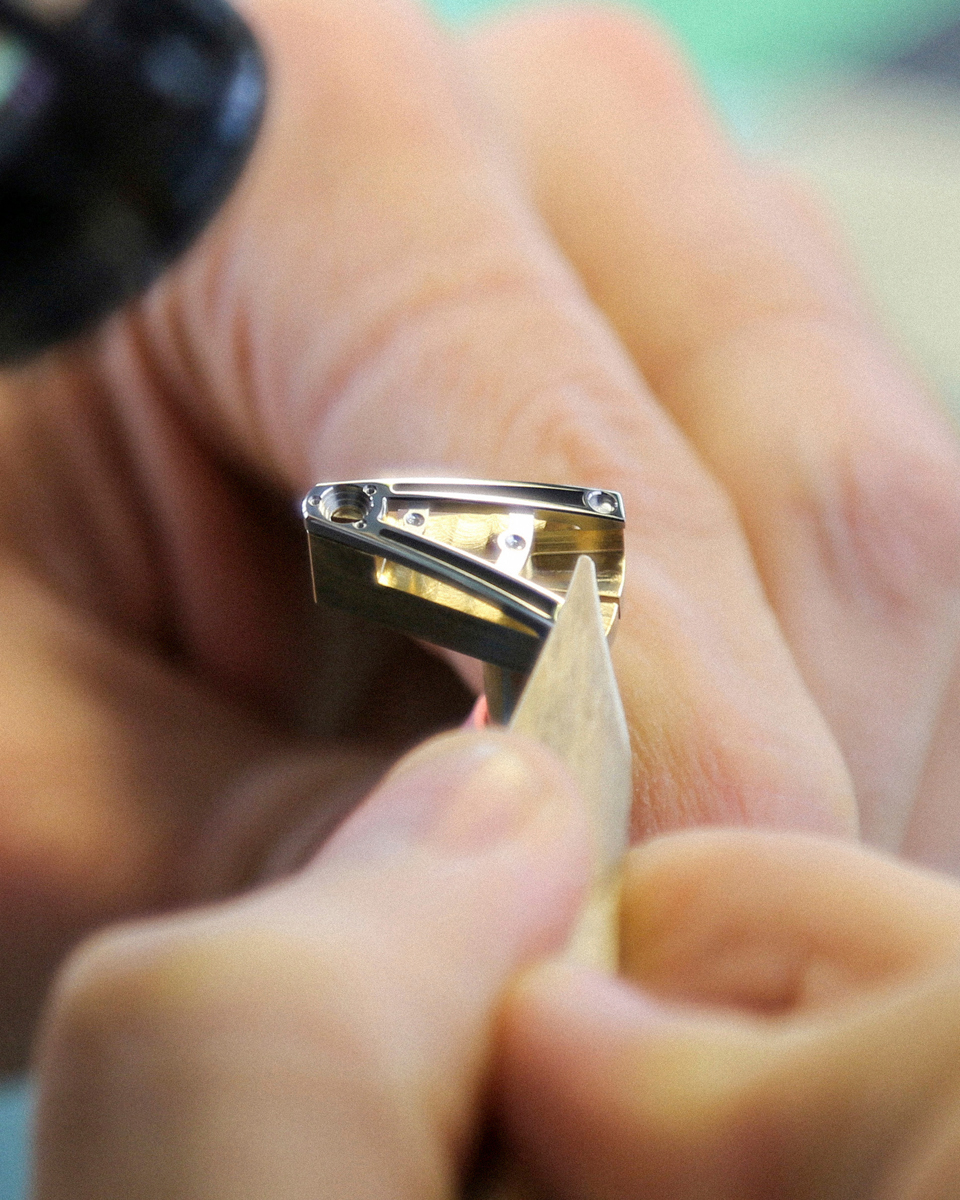 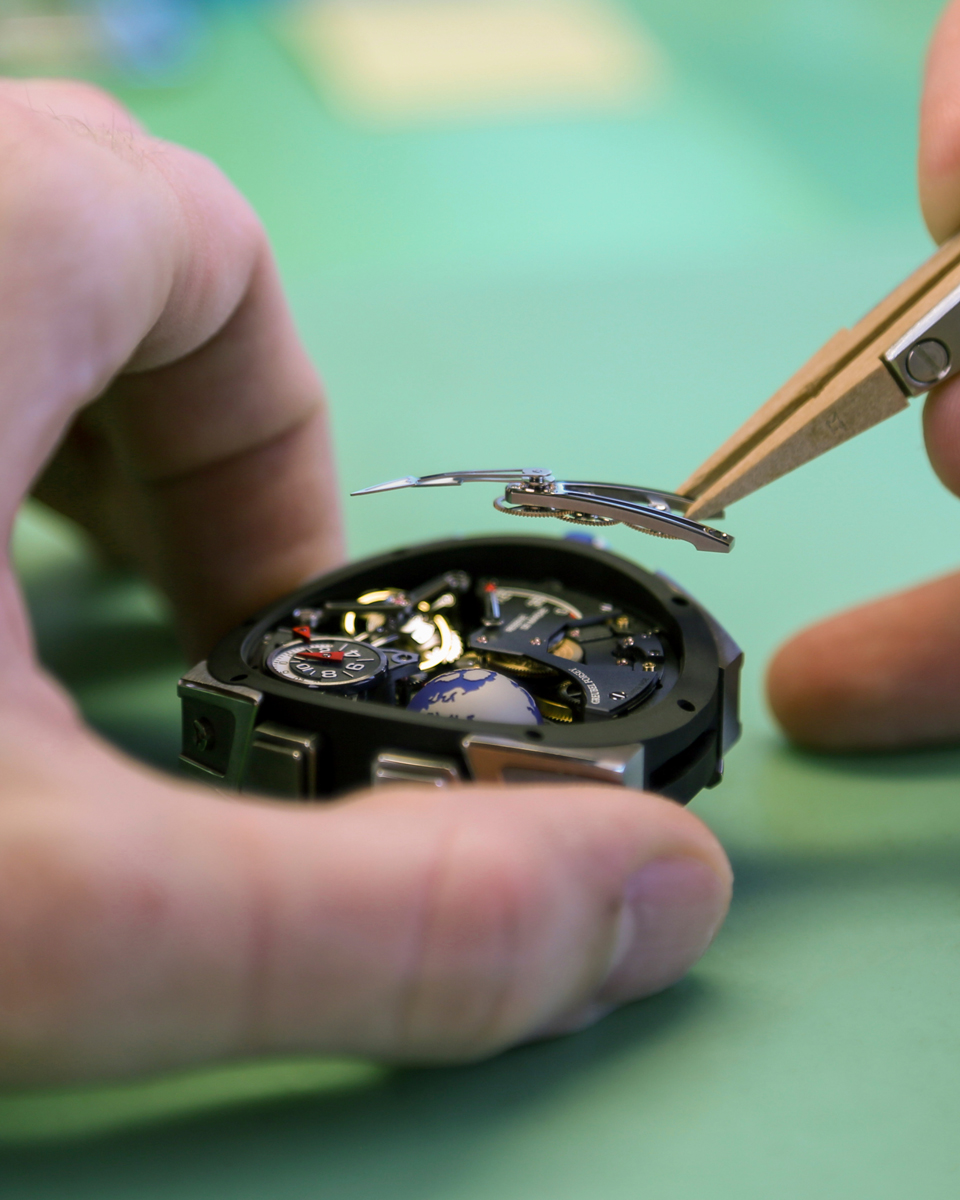 The display side of the GMT Sport presents classic Greubel Forsey architecture, an open, orchestrated theatre between suspended bridges, semi-apparent wheels and floating dials in three dimensions. In keeping with the sporting vocation of this timepiece, the focus is on legibility and efficiency. The hours and minutes are displayed by concentric openworked hands whose curved profile follows the curvature of the case and movement. Mounted on the suspended arch centre bridge with black treated openings, the gear train literally follows the curve of the bridge, overlooking the globe to drive the hour and minute hands. Ensuring excellent visibility in the dark, the triangular tips of the arrow-shaped hands and the markers on the minute-hour-ring are enhanced with luminescent coating. 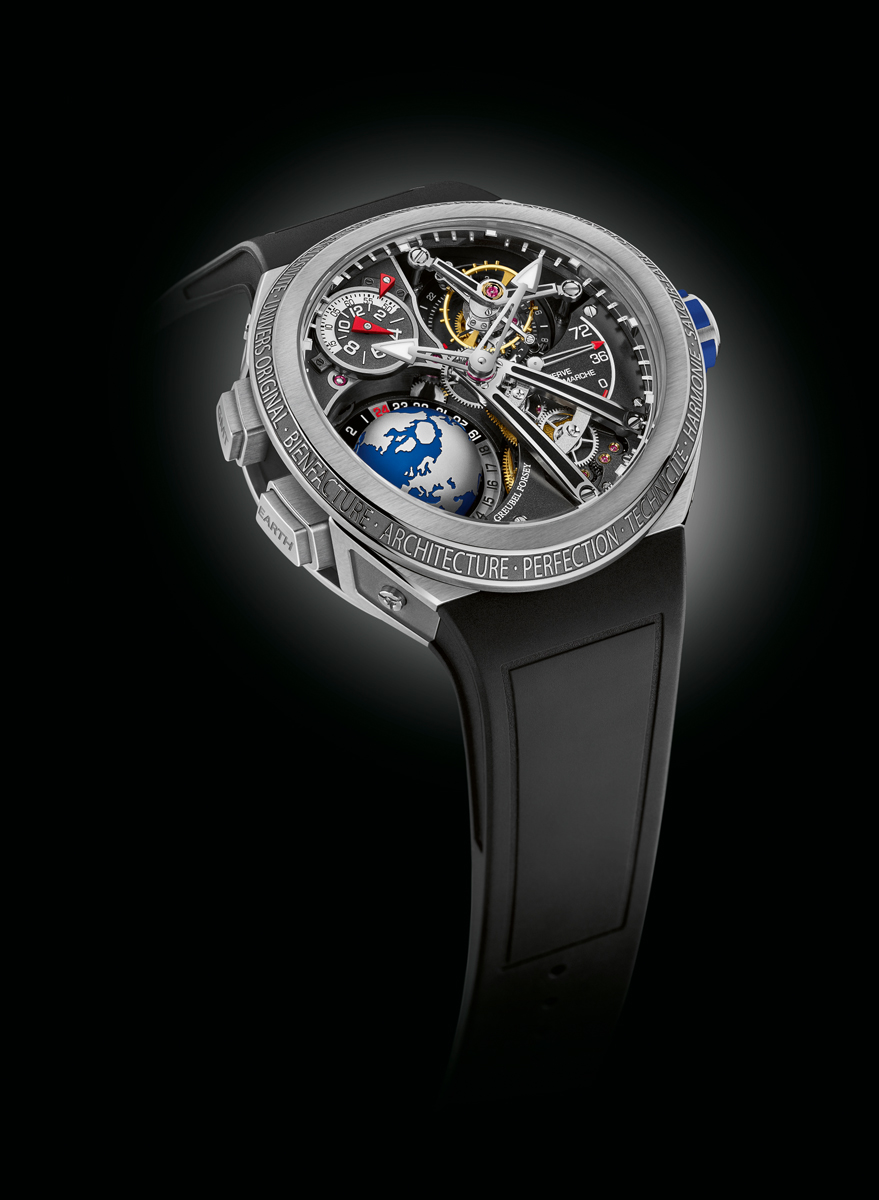 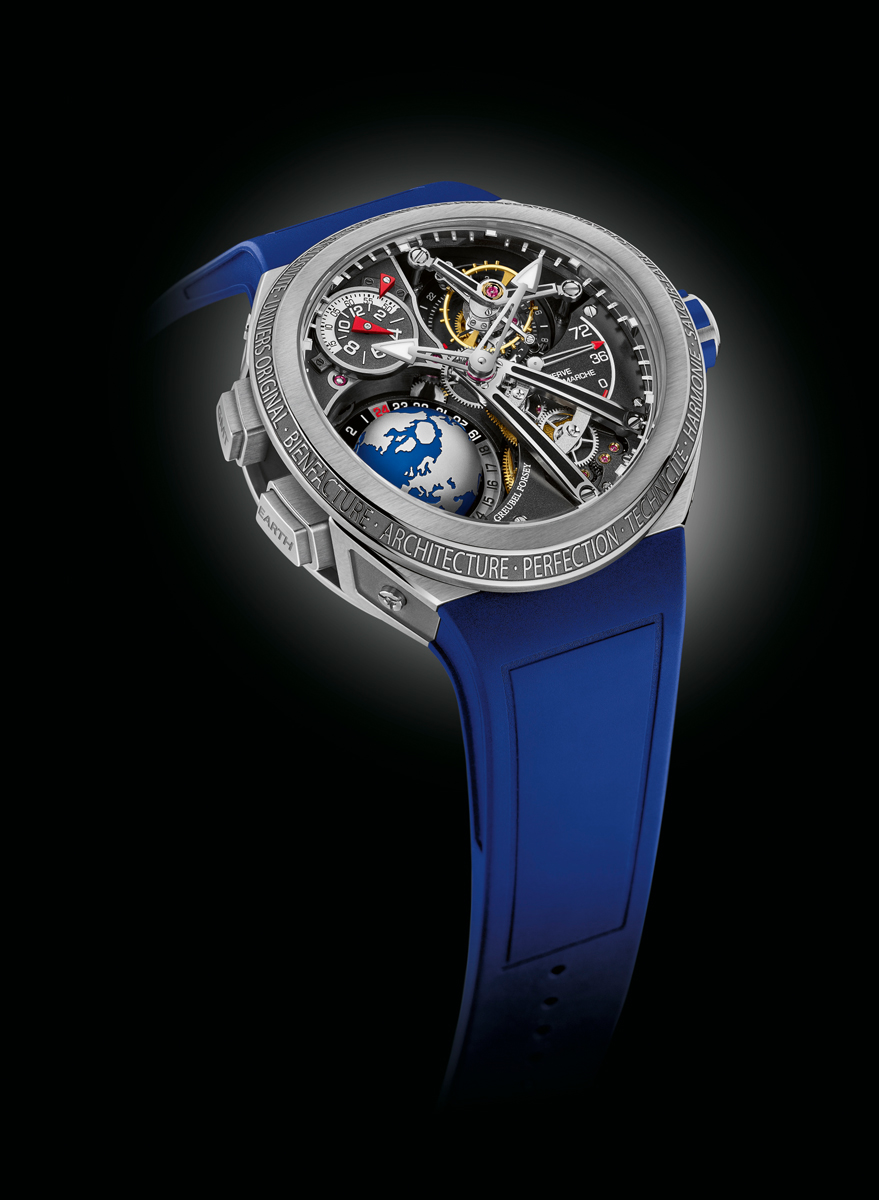 An auxiliary dial between 10 and 11 o’clock combines the small seconds on a large rotating disc, and the second time zone display with a hand. These two coaxial displays with red triangular indexes underline this timepiece’s technicity. The 72- our chronometric power reserve (ensured by two coaxial barrels in series) is indicated on a sector at 3 o’clock with its openworked hand and highlighted red triangle. Housed underneath the arched bridge, the power reserve differential is subtly engraved with Greubel Forsey’s values. Whether they are visible on the dial side or concealed in the caseback side, each of the 435 components of this hand-wound movement, including titanium plates and bridges, respect the most demanding criteria of the Greubel Forsey Atelier and the teams utmost concern for the finest workmanship.

The 24 Seconds Tourbillon is showcased at 1 o’clock secured by its distinctive and highly polished tourbillon bridge with black finished openings. This third Fundamental Invention by Greubel Forsey in the field of the tourbillon (after the Double Tourbillon 30 ° and the Quadruple Tourbillon) stands out with its cage inclined at 25 ° completing one full rotation in 24 seconds. The faster speed combined with the inventive cage inclination, significantly improves chronometric performance in a single-tourbillon system, with minimal movement height. This exclusive and patented configuration counters the disturbances induced on the movement by earth’s gravity, especially in stable positions. The rotating tourbillon cage housing the regulating organ has 88 components, for a weight of 0.38 grams – a feat made possible in particular by light alloy pillars and titanium bridges.

Precision and reliability summarise Greubel Forsey’s ground-breaking GMT mechanism, presented for the first time in 2011, with the GMT Black presented in 2015. In this double-patented mechanism, the second time zone indication on the auxiliary dial between 10 and 11 o’clock is combined with a universal time display to intuitively read the current time anywhere in the world. This innovation and the spectacle of the terrestrial rotating globe – seen from above the North Pole – performs each complete anticlockwise turn on its axis in 24 hours. It’s surrounded by a sapphire crystal ring with 24-hour divisions; where the wearer can read local time for all longitudes, including the day / night indicator (light zone / dark zone). On the caseback side of the GMT Sport, outer and central rings complete the sapphire cities disc to give UTC Universal and Summer Time for 24 cities in major time zones. This disc distinguishes those time zones applying summer time (on a light background) from those that do not (on a dark background). Reviewing the ergonomics, the GMT’s functions use two pushers located on the left side of the case; one to select the second time zone and the other for synchronising the local time with the globe.
The titanium and rubber crown also ensures optimum setting.

Created in a limited edition of 11 pieces, the GMT Sport with the key Greubel Forsey values in relief on the bezel has a black or blue rubber strap. A titanium folding clasp reinforces the comfort and ergonomics of this Greubel Forsey timepiece.