MB & F
0
In the post-war years of the late 1940s and 1950s, aerodynamic principles were just beginning to take root in the field of automotive design.

The boxy, carriage-like shapes of previous decades were melting into something more streamlined. At the same time, curvilinear forms became more prominent, carrying the immediate promise of power and speed. The sophisticated computer modelling and wind-tunnel technology we have today were far-off dreams at that time – designers were guided more by their aesthetic sense than by any scientific precepts.
The result was some of the most beautiful man-made objects ever created, epitomised by automobiles like the Mercedes- Benz W196 and 1948 Buick Streamliner. Other industries followed, notably that of aviation, producing aircraft such as the sleek-bodied, snub-nosed De Havilland Venom that patrolled Swiss airspace for 30 years.

Reminiscent of a jet engine, a highly complex titanium case in alternating polished and satin finishes encloses an equally complex manual winding movement, developed fully in house. Independent twin balance wheels beat at a leisurely 2.5Hz (18,000bph) on each flank of Horological Machine N°9, visible under elongated domes of sapphire crystal. A third pane of sapphire crystal on the central body reveals the gearbox of the HM9 engine: a planetary differential that averages the output of both balance wheels to provide one stable reading of the time. 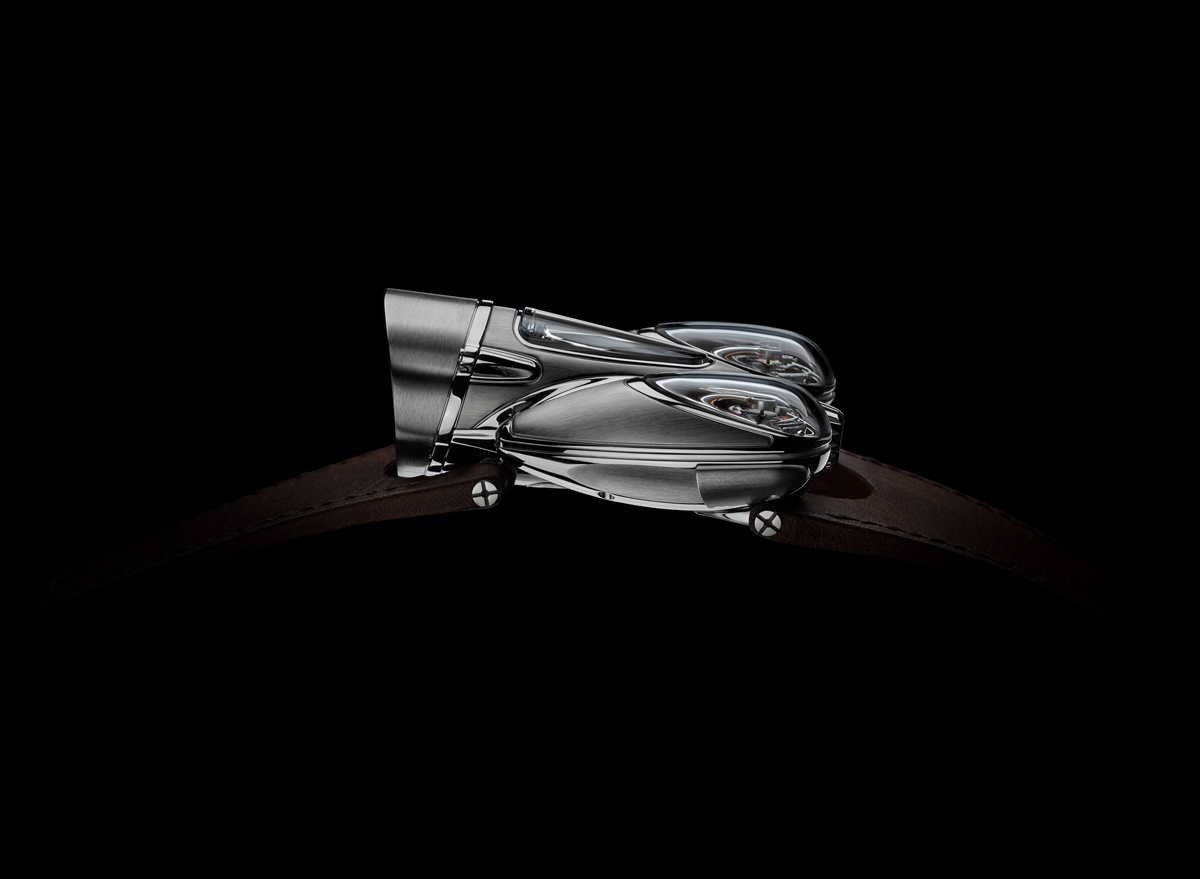 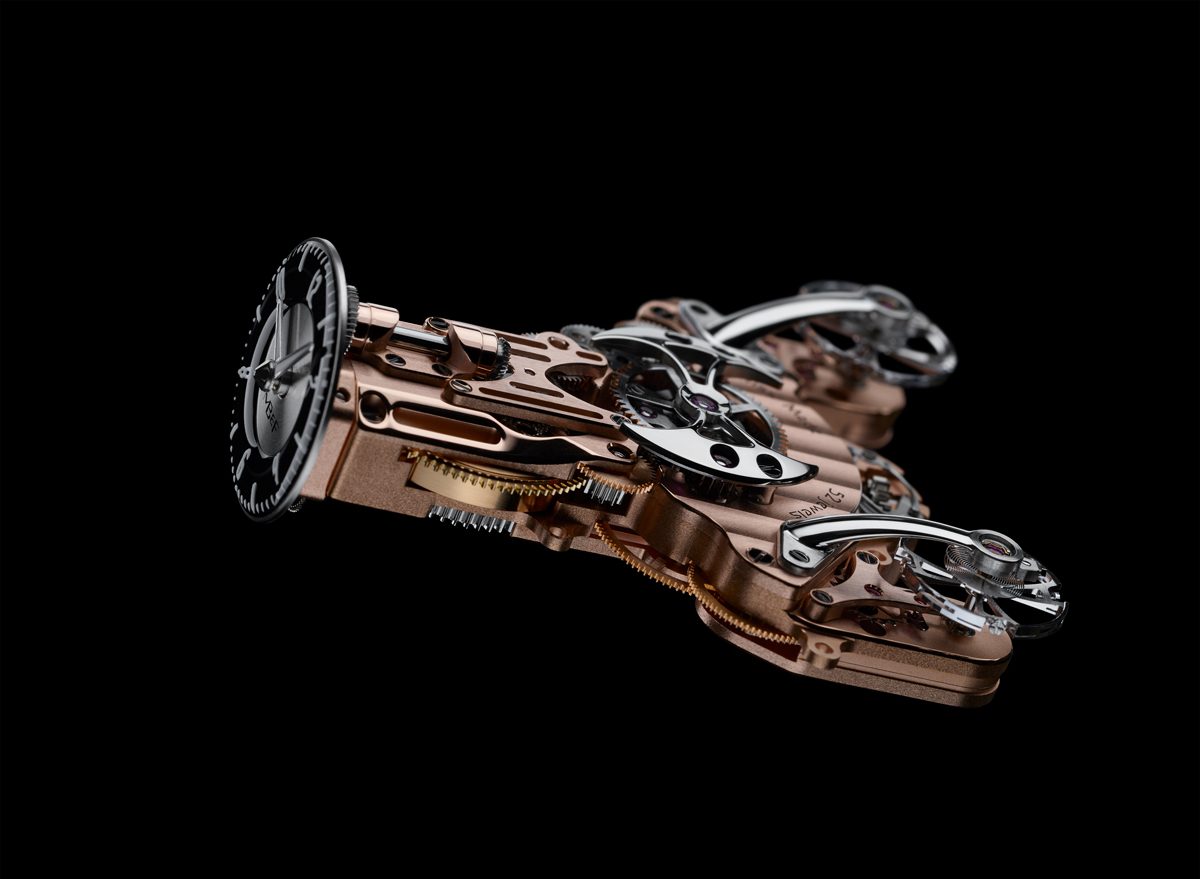 Sitting perpendicular to the rest of the HM9 engine is the dial indicating hours and minutes, driven by conical gears that ensure precise engagement even when motion is put through a 90° planar translation. The winding and setting crown is located on the rear of the central body, its deep fluting providing ergonomic grip as well as aesthetic coherence with the overall design.

HM9 Flow treads the path first opened by the HM4 Thunderbolt and subsequently by the HM6 Space Pirate, utilising a geometrically complex combination of milled sapphire crystal and grade 5 titanium case elements. However, HM9 goes beyond its predecessors, redefining what was thought to be possible in case design – illustrated for example by a patented three-dimensional gasket ensuring water resistance.

Horological Machine N°9 ‘Flow’ debuts in two titanium editions limited to 33 pieces each:
– the ‘Air’ edition comes with a dark movement and aviator- style dial;
– the ‘Road’ edition has a rose gold plated movement and
a classic speedometer-style dial. 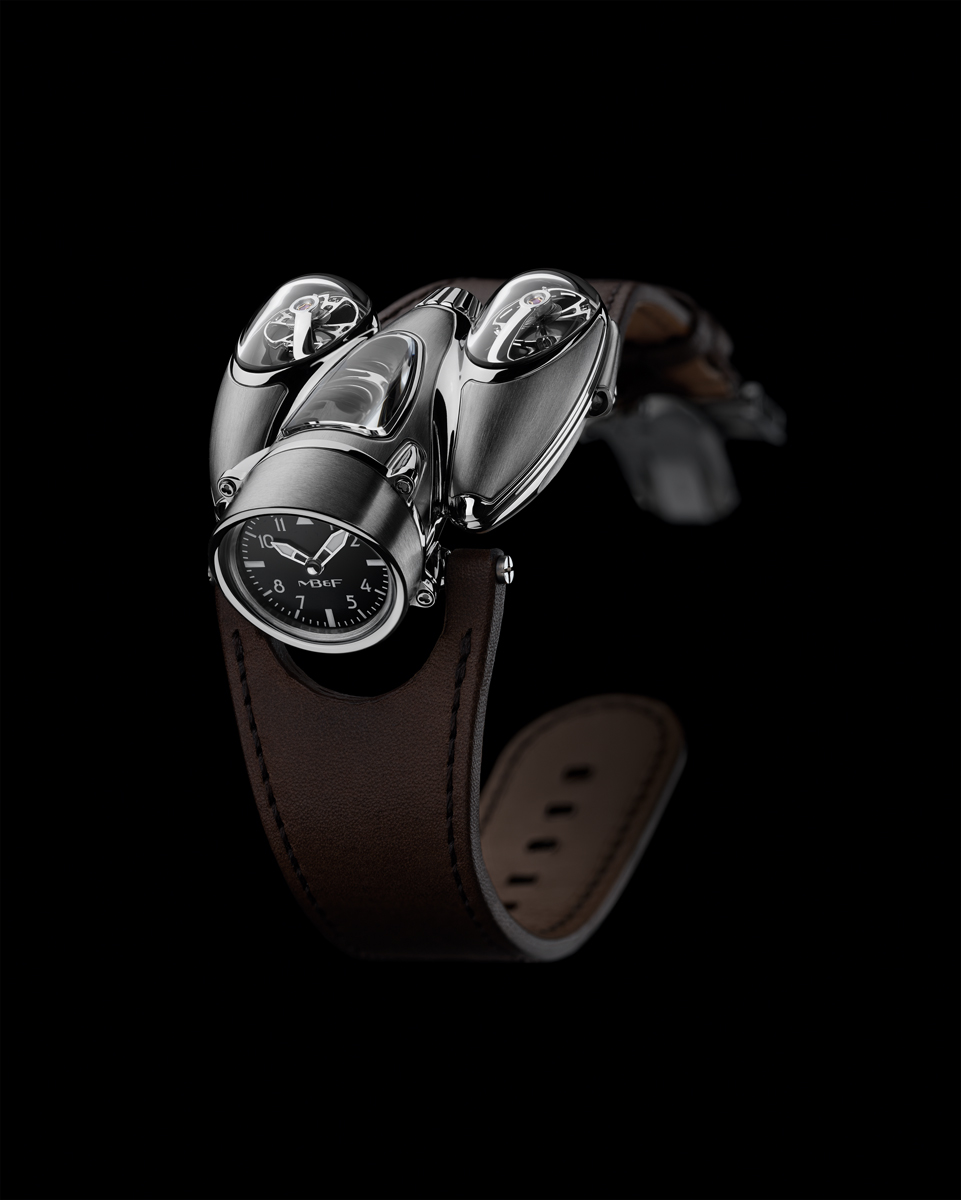 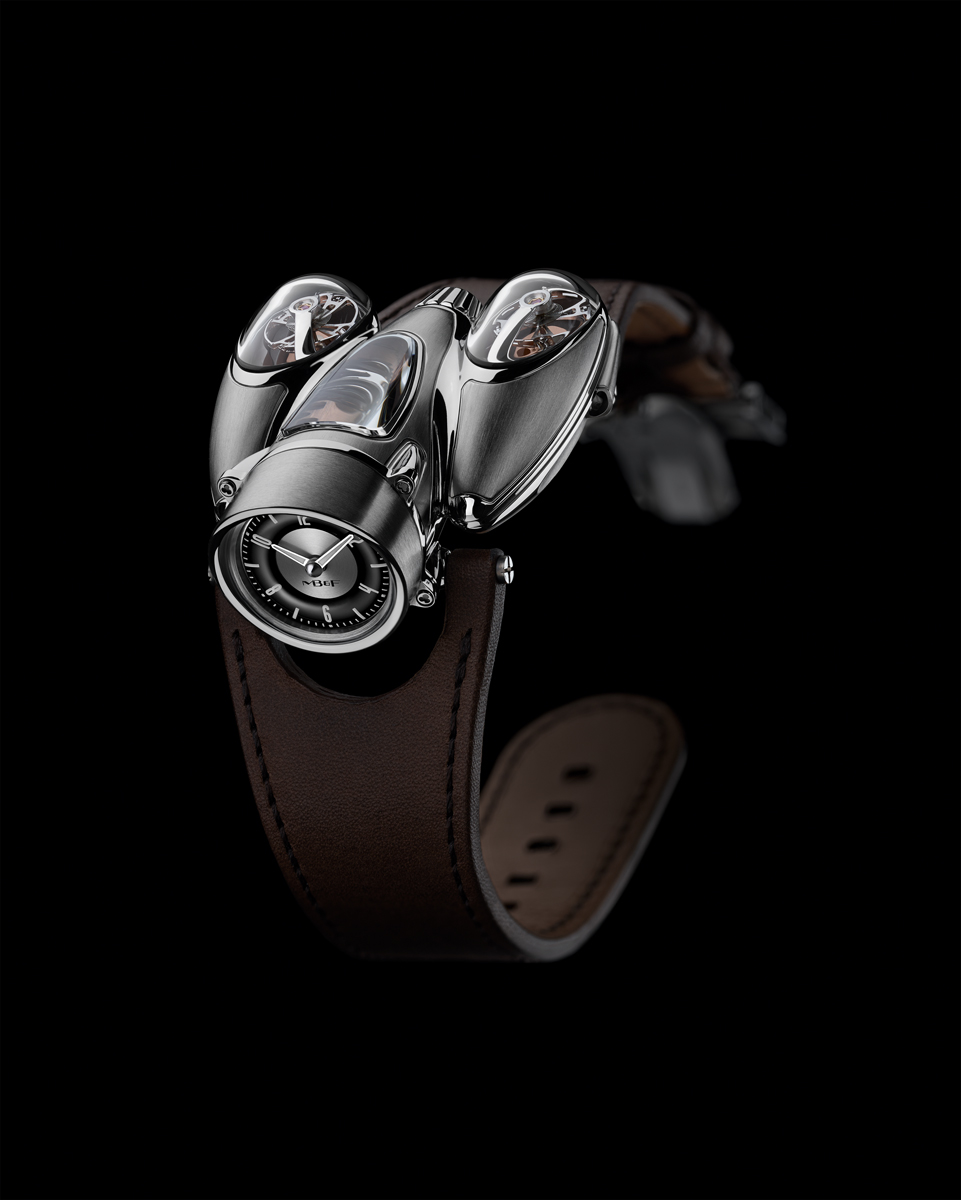 A lifetime car aficionado, MB&F founder Maximilian Büsser first channelled the visual cues of the mid 20th century in the 2014 HM6 Space Pirate, particularly in its “Streamliner” SV editions. Now in 2018, MB&F goes even further and presents one of its most ambitious designs yet.
Horological Machine N°9 ‘Flow’ is audacious in its design, not simply because of its unconventional form, but because of the extremes to which it takes this form. Mould-breaking, transgressive case shapes are nothing new to the MB&F Horological Machine collection, but HM9 has rejected all limits. Its extreme curves and acute angles required new manufacturing standards and techniques to obtain a complete milled and finished case. 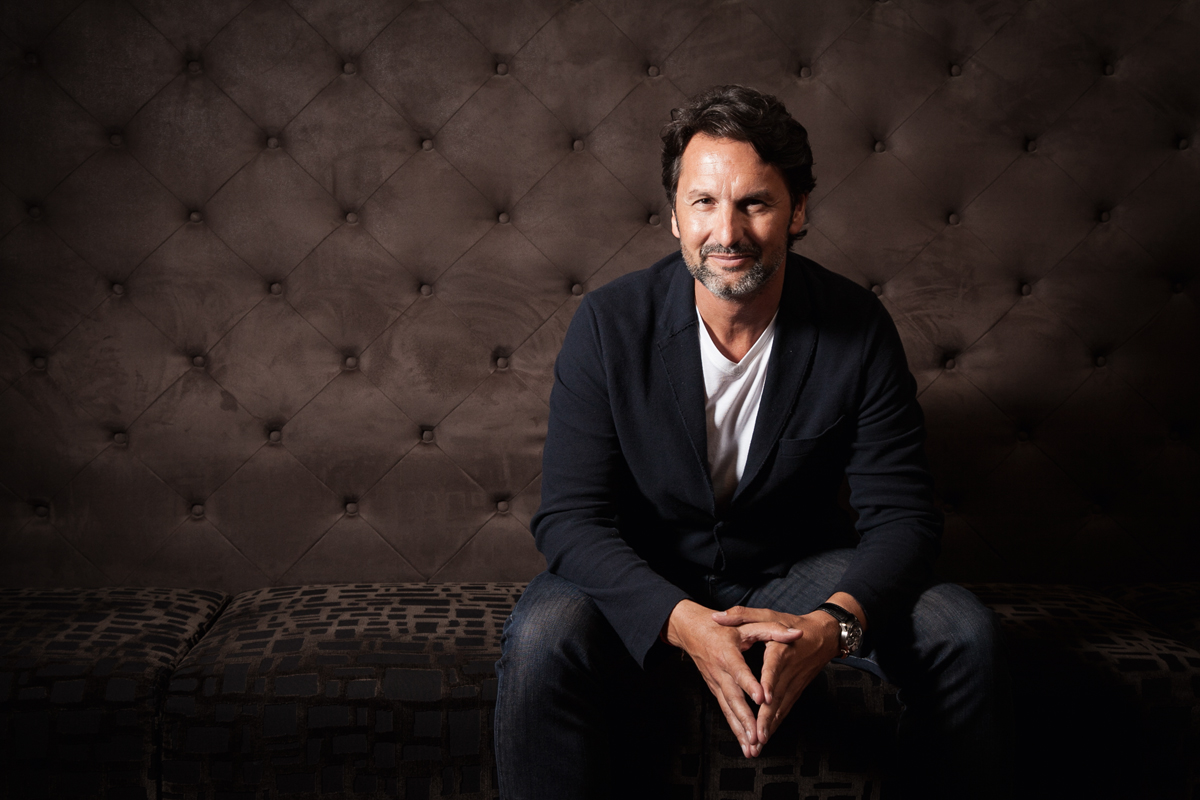 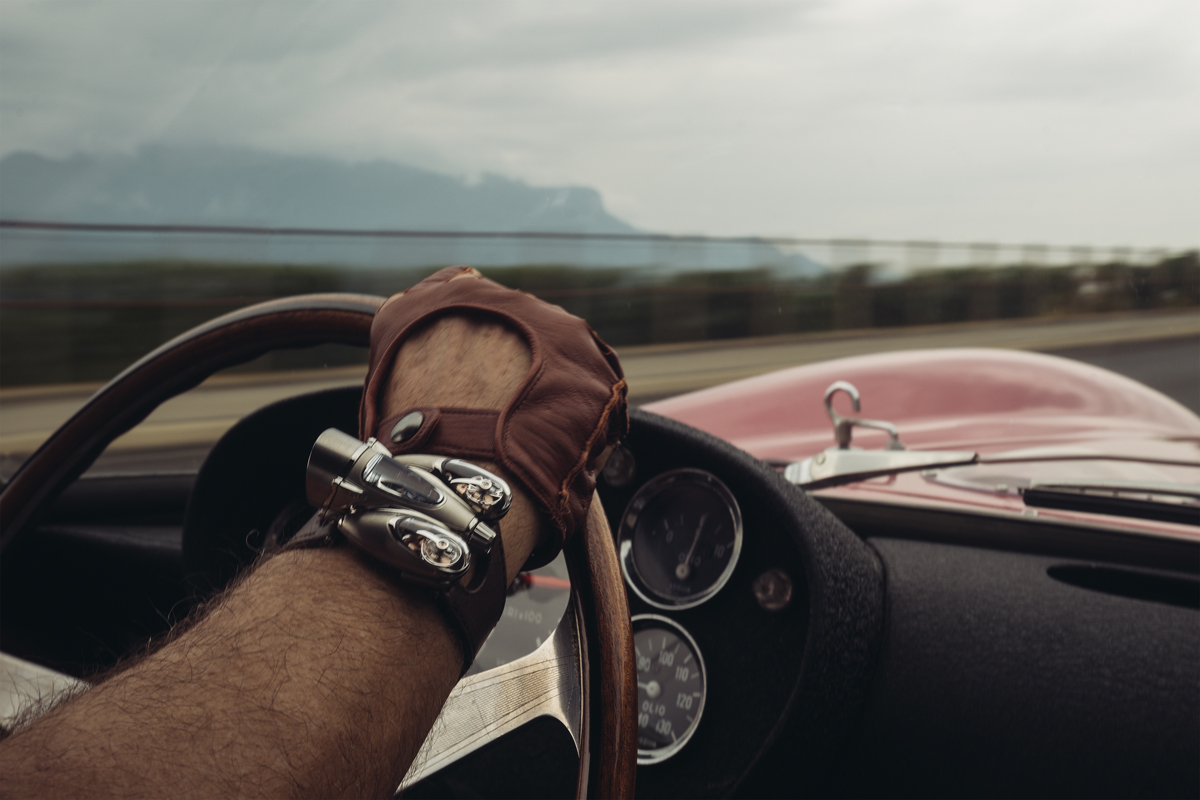 Inside, an equally complex manual winding movement developed fully in house; the result of three years of development, with the accumulated experience that came with the previous 14 calibres. A nod to Horological history and our Legacy Machine line, HM9’s two lateral pods each house a flying balance wheel and fully independent regulating system, visible under domes of sapphire crystal. A third pane of sapphire crystal reveals the central gearbox of the HM9 engine: a planetary differential that averages the output of both balance wheels to provide one stable reading of the time. Sitting perpendicular to the rest of the HM9 engine, the dial indicating hours and minutes is driven by conical gears that ensure precise engagement.