A. Lange & Söhne
0
The fifth model of the anniversary collection, LANGE 1 TIME ZONE, keeps track of the time at home and of the time in another zone. In commemoration of the 25th birthday of the LANGE 1, A. Lange & Söhne presents a 25-watch limited edition in white gold with blued-steel hands for frequent travellers and cosmopolites.

In our globalised world, watches with several time zones rank among the most useful complications. GMT timepieces indicate the time in a further zone which needs to be remembered. A world-time watch simultaneously tells the time in several zones. Which may lead to confusion. Conversely, the LANGE 1 TIME ZONE provides a clearly legible double time indication with a city ring that simplifies the setting of a second time zone.
While the large numerals circle shows home time, the small circle indicates the time in a second time zone. Each of the 24 time zones is represented by a city name on the peripheral city ring. A golden arrow at 5 o’clock points at the name of the city that represents the currently displayed time zone. Actuated 24 times, the corrector at 8 o’clock travels around the entire world in an easterly direction. Every switching cycle advances the hour hand of the small subsidiary dial by one hour.

The dual day/night indication provides extra orientation. Each of the two time circles features a small arrow-shaped hand. The bright/dark segments tell the user whether it is day or night, separately for home time and for the second time zone.
A refined synchronisation mechanism makes it possible to swap the zone time on the subsidiary dial to the large dial – a unique feature. It is particularly convenient during longer stays abroad when zone time becomes the home time. The global launch of the LANGE 1 TIME ZONE in 2005 was accompanied by the tagline “Born in Saxony – at home around the world”. It takes on a double meaning here. 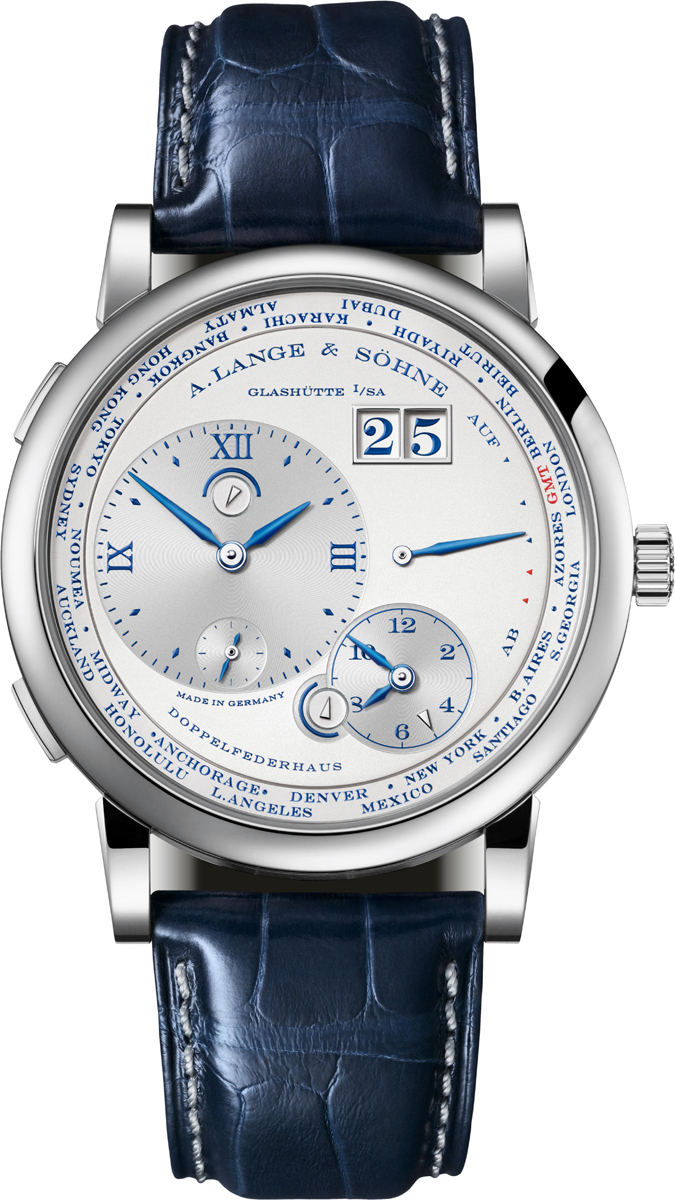 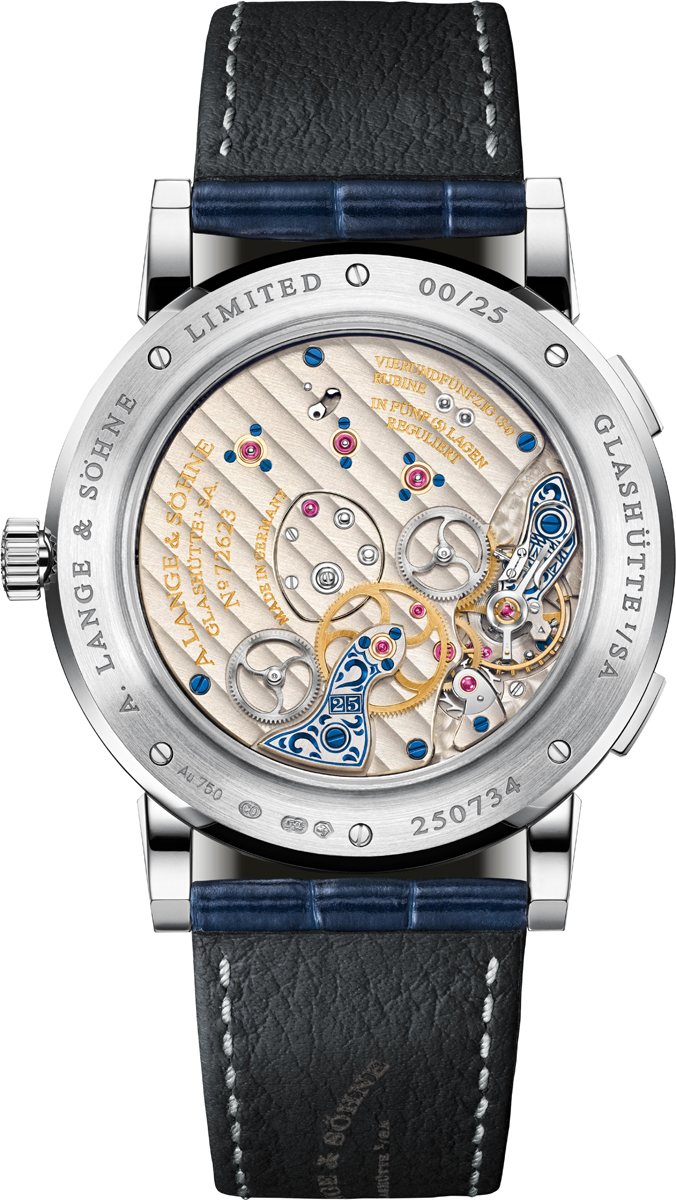 Silver and blue are the colours that dominate the “25th Anniversary” edition of the LANGE 1 TIME ZONE. The 41.9-millimetre white-gold case is combined with an argenté-coloured dial, thermally blued screws, and blue inscriptions – including the outsize date. A blue alligator leather strap with a white-gold prong buckle completes the stringent colour concept.

The manually wound calibre L031.1 features a twin mainspring barrel with a power reserve of three days. The sapphire-crystal caseback exposes the three-quarter plate with the wheel train that powers the zone-time ensemble. Further quality hallmarks include four screwed gold chatons, a screw balance with a classic whiplash precision index adjuster as well as manually engraved intermediate wheel and balance cocks. The intermediate wheel cock is graced with a blue line engraving with the anniversary number 25: Its typography and shape correspond to the Lange outsize date. It is the shared attribute of all models of the ten-watch “25th Anniversary” collection.